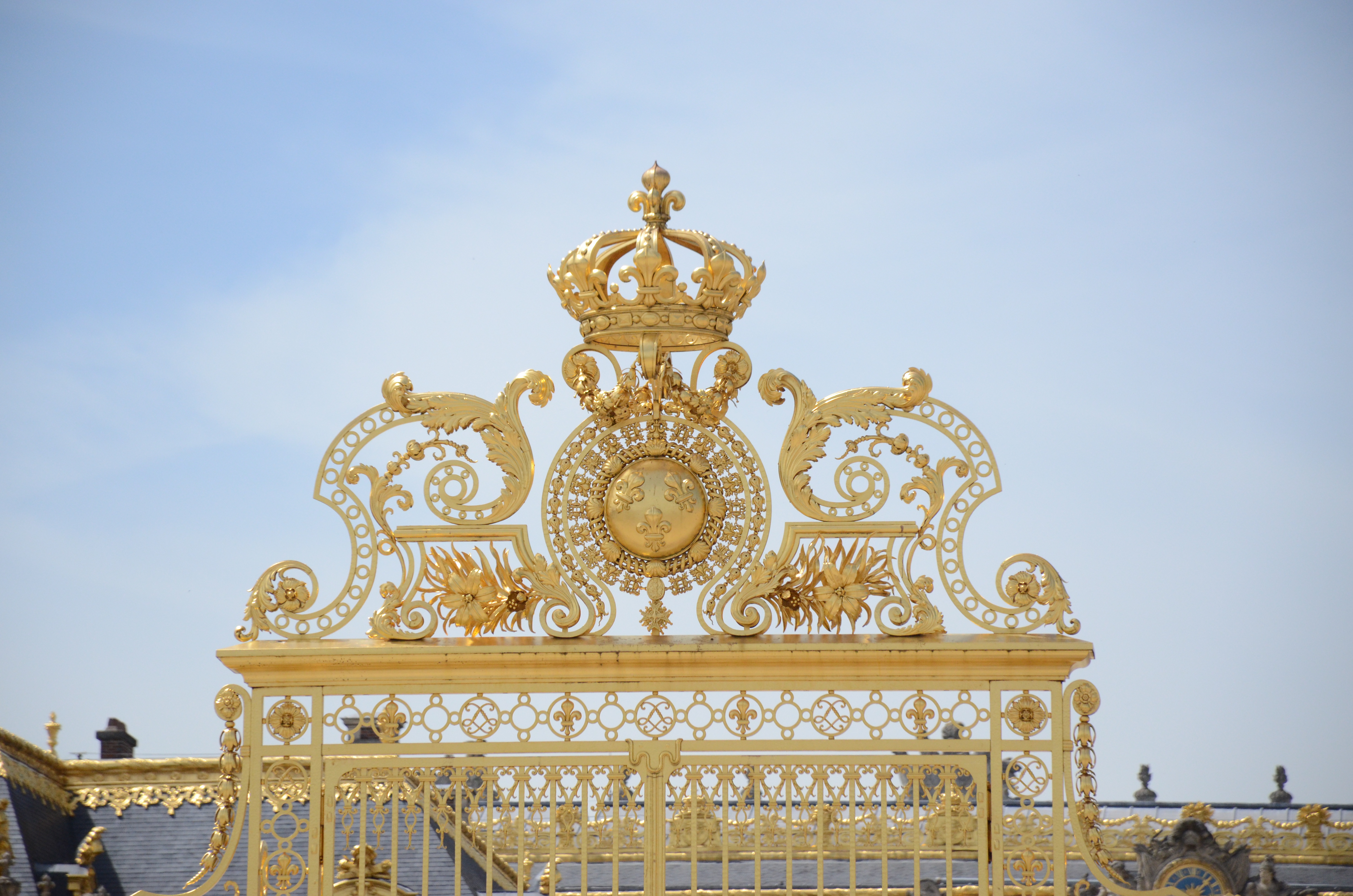 This grand palace on the outskirts of Paris is a fabulous opportunity to experience the grandeur left behind by the era of the French Kings. 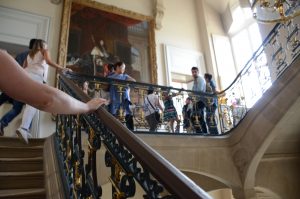 The palace is a short walk from the regional train station. When you exit, turn right and head to the first set of lights. At the lights look left. If you cannot see the palace, you’ll need to get your eyes checked, as its front courtyard is a short walk away. 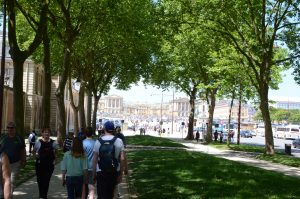 Tour buses were constantly coming & going from the Palace during our time in line to enter the palace. Although using a tour company is an option, with us staying in the city the palace was an easy journey via RER, line C. The stop is obvious as it’s terminal station Gare de Versailles, Chateau Rive Gauche.
I recommend the RER, as car parking appeared in short supply, and really, who wants to be trapped on a tour bus in Europe? [Not us!] 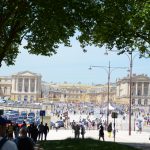 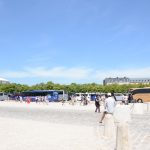 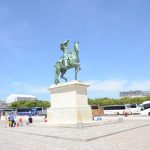 Go to the Wikipedia entry to read more about the Palace of Versailles, however my summary of the palace: Starting with Louis XIV this palace grew in importance, size and grandeur. Although the grounds are massive, the most impressive feature is the hall of mirrors.

It was constructed in the late 1600s, and at the time of construction a dispute with Venetians occurred, as they claimed to have the rights on the manufacture of all mirrors. The Wikipedia entry is a good example that the story of how can be as interesting as the outcome.

The palace is an extremely popular site to visit, even their website attempts to warn you of busy days. On our visit, it was very crowded for three reasons: 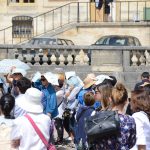 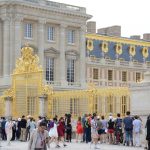 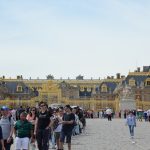 Purchasing tickets ahead of time merely eliminates your requirement to line-up to purchase tickets, but you still have to line up to enter. I’d recommend buying them in advance as the ticket office will stop selling tickets to ensure the palace isn’t over capacity.

We headed to the Gardens first because of our arrival time. We enjoyed a leisurely start to our day, and arrived at the Palace after the lunch hour. At this time, the length of the Palace line seemed so great I doubted we could explore the palace and then return outside in time for the fountains to be operating. 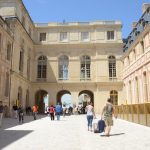 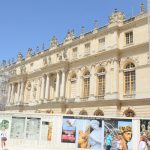 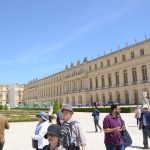 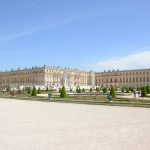 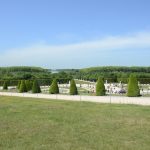 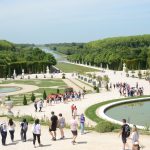 Main garden to the west 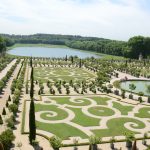 Garden to the south

The Gardens are well maintained, and had the weather been cooler we would have explored more of the gardens.

The gardens provide a few options to explore beyond the heel-toe express:

All the fountains were running, so we slowly walked past the rest of the fountains as we exited the gardens and headed to the front to line up to explore the Palace. The line was shorter than when we first arrived, however we still waited over an hour to enter the palace. I passed the time people watching, and trying to find different angles to take pictures of the front of the palace. She slowly melted next to me in the heat of the afternoon.
Touring the Palace is in one direction, traveling through many rooms, with the hall of mirrors being near the end. The crowds continue throughout the palace as tour groups act like vascular plaque, impairing your ability to move freely between rooms. 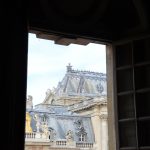 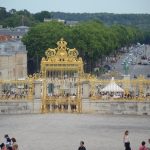 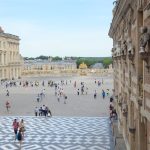 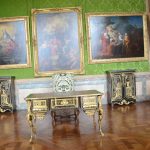 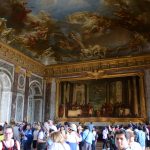 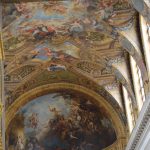 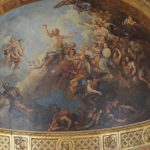 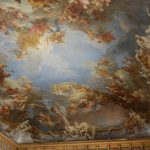 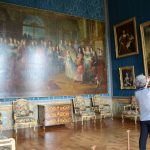 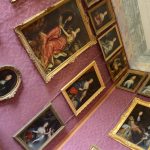 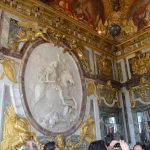 The groups gather consistently in each room and would huddle near their guide, in the appearance that if one were more than a millimetre away from a fellow member of the tour they would be forever lost in the Palace. Some groups made this huddle approach comical because their guides had mini-radios to broadcast their speech to their group, each holding a small radio. Again though, the tour groups continued to huddle around as if the signal strength was for a maximum one metre.

How do we handle these crowds?

Being 6’4” has advantages. Typically, I can easily see over the sea of humanity to know where to proceed. With Amber holding my hand we politely say “Excuse me” and move. When this doesn’t work she isn’t too afraid to gently guide people out of her way. (she would never just push) 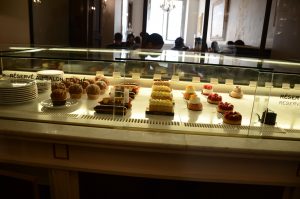 As we ended the tour we wanted to have a snack and relax before rushing to the train for the return trip, and there was a wonderful café in the Palace, Angelina. It is a Paris original, and has grown to have several cafés including one in the Louvre, and the Palace of Versailles. If you have the chance to visit an Angelina, just looking at the display case of gorgeous pastries and confections will make anyone hungry. Based on our timing of the day, we decided to have afternoon tea to have something substantial to eat before heading back into the city.

It came with our choice of their wonderful creations and was delightful to eat. You may notice a theme throughout our blog, as she is a foodie and is most happy when fed and watered (given tea) on a frequent basis. I have learned to keep this in mind when planning our adventures!

We finished our time at Angelina’s at the same time the Palace was beginning to close, near 6pm. Upon returning to the RER station, having purchased our return tickets ahead of time allowed us to skip the 10-20 person ticket line, and head straight for the automatic gates and onward to a waiting train. 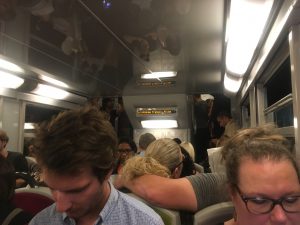 The downside about leaving Versailles at 6pm is that the RER quickly fills up with daily commuters as it heads into the city. Before we reached our station to transfer all the seats were taken, and there didn’t appear to be any standing room left for people wanting to board the train.

We were happy to leave the crowded train and make our way back to the hotel for a quiet evening in our room.

Permalinks to the other portions of our trip: