A Day outside of London

We chose to rent a car for the day as taking public transit would have required a very long day of traveling into and out of central London and may have given us little time to visit Windsor Castle and attend the Harry Potter Studio Tour. 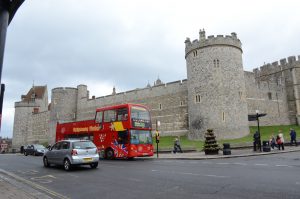 Windsor is a short drive west of Heathrow. I found it an easy drive as I got used to driving on the opposite side of the road. Once in Windsor, we parked in a garage beside the main city center, as it appeared to be the closest to the castle.  The walk to the castle is a gentle uphill walk. As the castle is such a major attraction, the main street certainly appeared to be catered to tourists as there were several stores filled with souvenirs for sale.

Pre-purchased tickets allow holders to head straight to security and onto the castle grounds. It was an overcast and cool day for June, and I think pre-purchasing saved us at least a half hour from waiting in the ticket line.

Windsor castle is a working castle. This means that the royal family could be at the castle during your visit, and if that occurs the amount available to tour, and timing of the castle hours will be modified. Like this blog, check out their website for details. We were able to explore all the parts available at Windsor Castle as no events were occurring and the royal family were not present.

After we visited the state apartments, we walked through Saint George’s chapel.  It is an impressive building in its own right.  Although it is not as large and imposing as Westminster Abbey, it is certainly worth visiting. 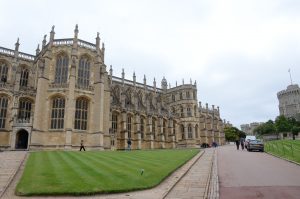 With our visit complete we returned to our car through a stroll back down the main street.  Before reaching the car we stopped at the Marks & Spencer to grab a bite to eat and a cup of tea. Amber was in heaven having tea served properly, in a ceramic teapot with milk and sugar on hand.

From Windsor we made the short drive up to the Harry Potter Studio Tour.  Google maps provided flawless directions. 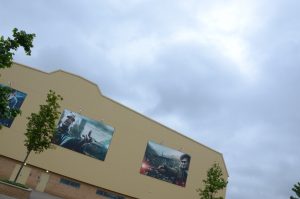 Tickets to the tour are highly recommended ahead of time.  I was sceptical, however upon our arrival the site was busy for a Thursday in early June. Make sure to purchase tickets ahead of time to ensure you are able to visit.

The tour takes you through two large studio buildings.  One holds a large collection of sets and props from the movie and the second focuses on the many facets of making a movie, especially costumes, artwork, models and make-up.  As the movies were shot while JK Rowling was writing the final books in the series, many props and sets were kept without knowing which would be used frequently throughout the remaining movies.  For Harry Potter fans that resulted in many sets and props being kept and they are now on display.

The most impressive item, the Dining Hall, is the first area you enter on the tour and is the only area that is guided. The Dining Hall was the only prop to be fully constructed with a permanent floor. The years of filming gave the floor a natural worn in look for the later movies. The audio-visual guide not only has additional audio descriptions but many pictures and videos to watch to supplement the tour.  I found the original audition clips to be worthwhile to watch.

Approximately halfway through the tour is the backlot café where in addition to food from the servery you can try Butterbeer. We had spent so much time exploring the sets and props that both of us were very hungry when we arrived at the café.  Unfortunately the quality of the burgers were subpar even for a cafeteria-style establishment and the Butterbeer tasted like cream soda with caramel flavoured foam.

After eating we completed the tour.  The remaining areas to explore on the tour focused on make-up, costumes, and artwork.  The details and craftsmanship of each of those components truly enable a movie to transport you into another world. 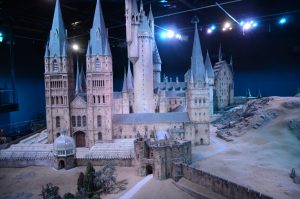 Once complete, we survived the gift store gauntlet, with the added bonus of completing our tour near the park’s closing time.  Thanks to the sky clearing and lots of daylight in June, our drive back to return the car went without issue.  We rented from Sixt, and their location is right across the street from an underground, so it was an easy trip back to the hotel.

Permalinks to the rest of the trip:
Overview