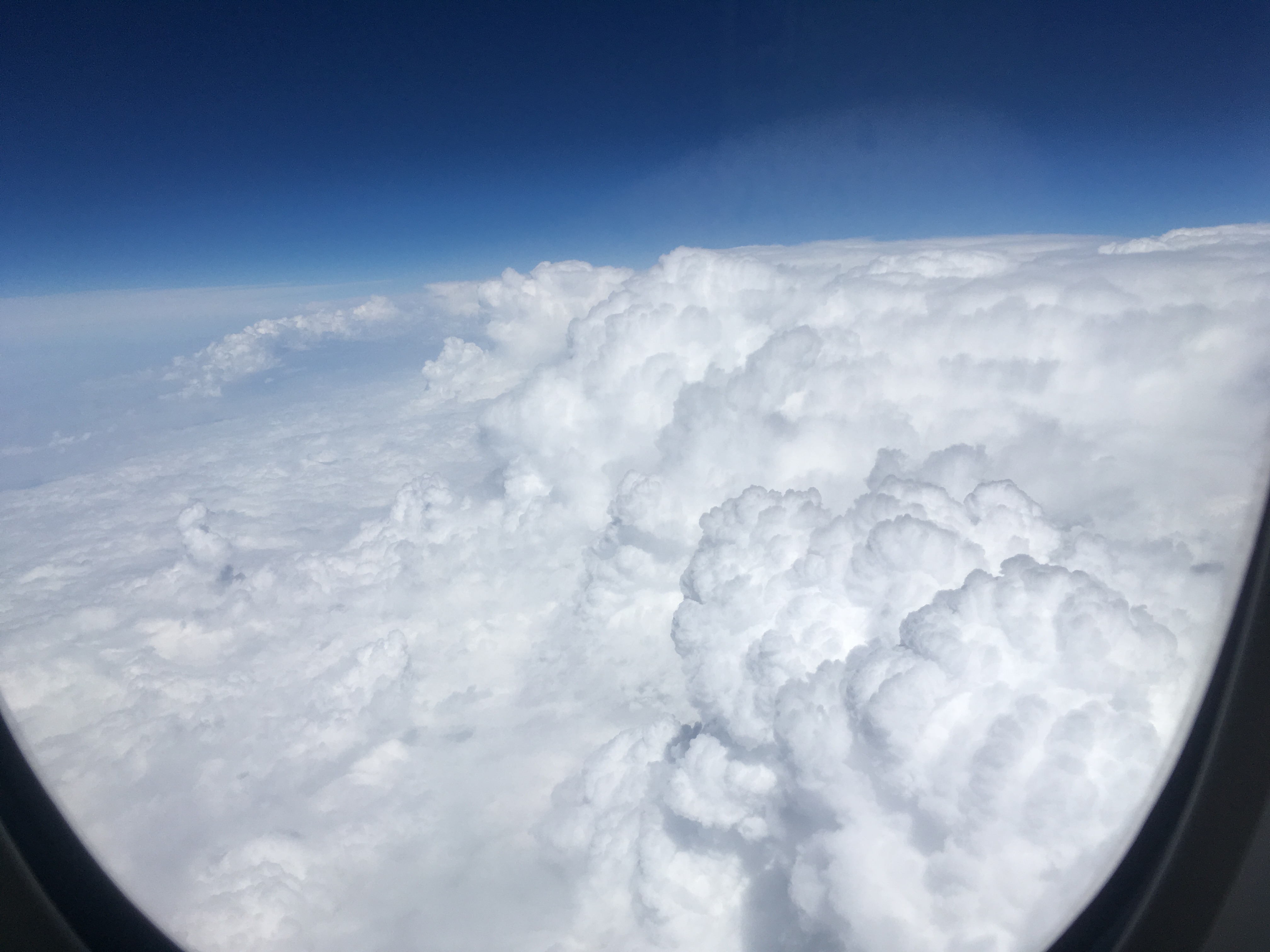 As we woke up we realized our vacation was coming to its conclusion and it was time to head home.  Amber had already packed the night before allowing us to effortlessly check out and make the short drive over to Charles de Gaulle (CDG) airport.  The Sixt rental car location was sandwiched between the terminal 2 buildings.  This made for a short walk to Terminal 2A.

Navigating Terminal 2A at paris (cdg)

The Air Canada check-in was reasonably easy to find.  We had arrived extremely early for our 1pm flight which resulted in us walking right up to the check-in agent to receive our boarding pass, and say farewell to our checked luggage.  Two benefits of flying business class out of CDG with Air Canada became evident quickly. On our boarding pass was an “Access No. 1” sticker 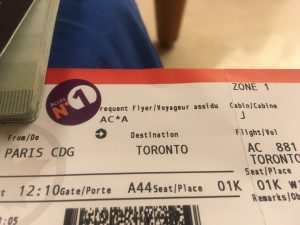 that allowed us to go through a priority lane for passport control, and screening. In all, we probably got through both parts in less than 10 minutes.  After security I started plane spotting while Amber spent time looking at the items available at Duty Free and the shops. The Elephant motif on the Emirates A380 made the plane appear even larger. 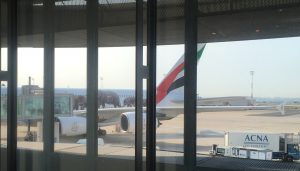 We navigated our way through the duty free stores to locate the Air Canada Maple Leaf Lounge. 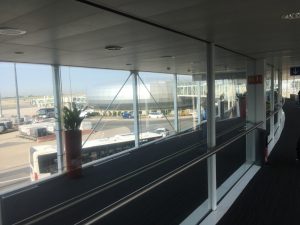 Walkway to the end of 2A

Air Canada has a lounge in the circular portion of Terminal 2A.

In the middle of the circle 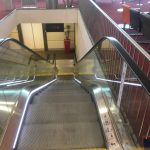 A way down to the lounge

At the time of our visit the lounge also allowed paid access through Priority Pass. Although the lounge is below the main departure level, there were many window shades drawn open to allow for natural light and the ability to see the lower half of the aircraft at the gates.

The lounge wasn’t busy as the first flight to Montreal was in the process of boarding, and the next flights to Toronto and Montreal both departed after the lunch hour. 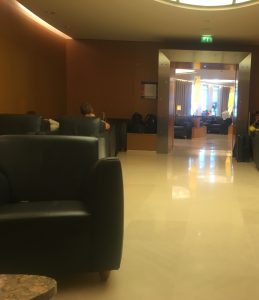 The lounge is split into two halves relative to the lounge entrance. We decided to relax in the quiet area at the end of the left side. During our time I walked through the rest of the lounge where the right side of the lounge had a smaller buffet, with the same selection of items and a business centre providing privacy and a proper workstation, however this area was without natural light.  There are washrooms within the lounge that allowed us to stay in this space until our boarding time.

During our time in the lounge we had our late breakfast or early lunch, depending on what we each selected to eat. 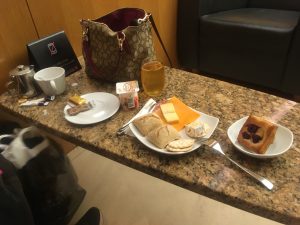 During our time the food selection changed from breakfast that was cheeses, cold cuts and banana bread to lunch that included warm food such as sliders.  In the quiet area there was a power outlet under each low height table that formed seating for four.  The lounge was not busy and this quiet space never had more than 6 other travellers sharing the space. 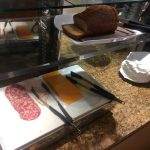 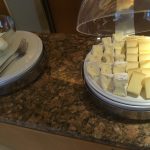 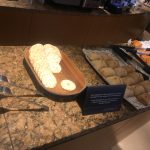 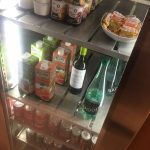 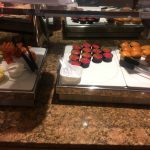 After enjoying our time in the lounge we left for our gate.  Upon our arrival, the waiting area was filled to capacity, and there was no plane at the gate.  Only after the gate agent made an announcement did I realize the plane was at a remote gate.

This was the first time that I boarded a flight where the passengers requiring assistance were told to wait until the end of general boarding before they would be transported to the aircraft. That allowed us to board the first bus that was filled to capacity with business class and frequent flyer passengers.

After some more plane spotting at ground level, we arrived at our plane so efficiently that we had to wait to exit the bus. A few minutes standing on the bus ensued before the ground staff allowed us to board. I think this was my first time boarding a Boeing 777 from the tarmac, it’s much more imposing than the regional jets, A320s and Boeing 737s over my years flying.  It is easy to forget when boarding via the jetway that some planes are massive!

Even at a remote position I enjoyed watching the aircraft, and traffic around our plane during boarding. The highlight to watching the activity outside the window was the baggage handler for Air Algerie picking up the luggage that had jumped out of their truck. By the time the luggage was returned to the vehicle there was a line of several service vehicles waiting to pass. 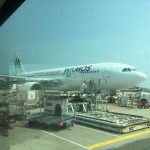 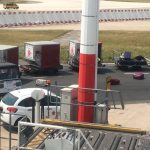 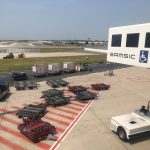 Almost all picked up.

This plane had the updated reverse herringbone business class seats that we had on the 787 to London. That allowed both of us to have 2 windows each to stare out of for the flight. While watching from the window the flight crew introduced themselves to us and offered us a pre-departure beverage that accompanied the airport activities to watch. The final part was watching the vehicle arrive to transfer those passengers who required wheelchair assistance. Once on board, the flight crew made their introductions and informed us of a long taxi time. After that we were pushed back from our remote spot, and started to taxi.  First up was passing the Montreal bound flight at a gate in the circular end of Terminal 2A. 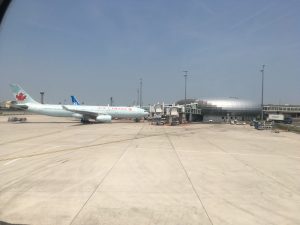 Then we continued.  We taxied past the gorgeous Air France Concorde on display. 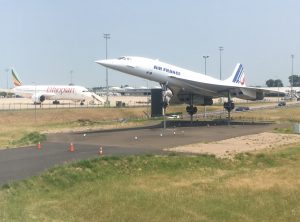 And more taxiing. The plane turned left and continued to the end of the runway, past a Skyteam livered Air France being towed to its gate. 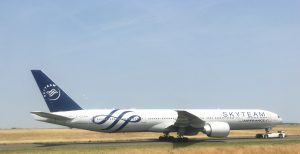 And more taxiing! Over a highway (this sight never gets stale for me) 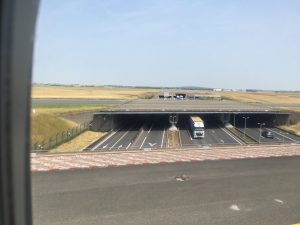 As we positioned onto the runway, the taxi time felt like it rivalled the time taken to use the far runway at Amsterdam Schiphol.  As the plane turned, I managed to capture a Delta flight about to touchdown on the parallel runway. 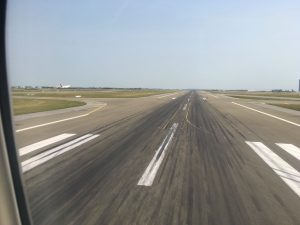 Take-off and the climb were smooth.  Once we were at altitude the cabin crew were quick to offer drinks and towels ahead of serving lunch. 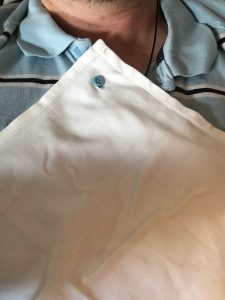 Within in the Aeroplan/Air Canada section of flyertalk forums it had a thread dedicated to napkins and discussed its vital importance and function to travellers. I was happy to receive one that did have a button hole and took full advantage of having a cloth bib at 35,000 ft to enjoy my meal.

Honestly I cannot recall how the menu described the starter and salad, however by the time it was served the food from the lounge had given up trying to keep me full and I gladly ate it. 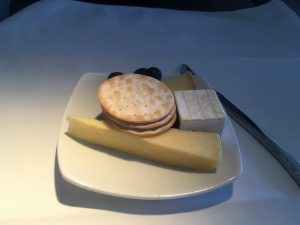 The main course was fine, and the cheese plate was a good way to conclude lunch.

Now before I snapped this picture of the in-flight, when the flight was much closer to Iceland, the cabin crew made a request for any medical professional to identify themselves to the crew. 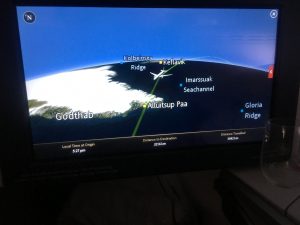 As the announcement was made several times, up to 4 or 5 within a short period of time, I glanced back to Amber where she too had the look on her face of “With that many requests, how serious is this?”.  I waited, thinking of the odds of the plane diverting to Iceland.  Fortunately the flight continued onward to Toronto without any further medical request announcements.

On our approach into Toronto the weather was spectacular for taking pictures as we flew over the northern edge of York Region. 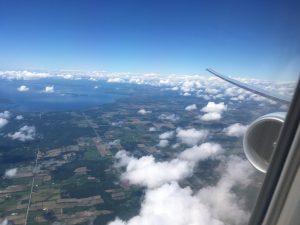 Without any turbulence during approach, a smooth landing capped off an enjoyable flight.  As the plane approached its assigned gate we were informed that paramedics would meet the passenger requiring medical assistance at the gate, and all passengers were to wait.  Seat 1K is right behind the forward galley and so I started talking to the cabin crew where she informed me that Air Canada operations receive a minimum of 3 medical calls every day.  She continued and said that when there are no medical professional onboard the operations staff have one available.  She remarked that she had been on flights where the ground based professional would walk through with cabin crew to determine the severity of the illness and whether the flight will continue, as ours did, or a diversion is required.  Before we could say any more, the jetway was clear and we walked into Terminal 1.

With minimal waiting time we were through customs, picked up our luggage, exited the terminal and hopped in a taxi in time to enjoy rush hour traffic on highway 401 on our way home.

Permalinks to other parts of the trip:
Overview