Our four day long weekend had come to its end and we returned to the airport to fly back to Toronto.  Before our flight though, another Maple Leaf Lounge to visit at Vancouver International Airport.

Vancouver’s airport is a single large terminal that is separated into three sections being domestic, US, and all other international flights.  After returning the rental car we made the short journey up to the departure level where we checked in.  Our attempt to return to a window seat assignment due to an aircraft swap were dashed.  My learning here — try not to assigned yourself to a row that might not exist when equipment swaps occurs, as we went from an A330 to a 787-9.  The bigger downside of the swap was that the economy seating layout of 2-4-2 in 330 turned into a 3-3-3 in the 787-9. 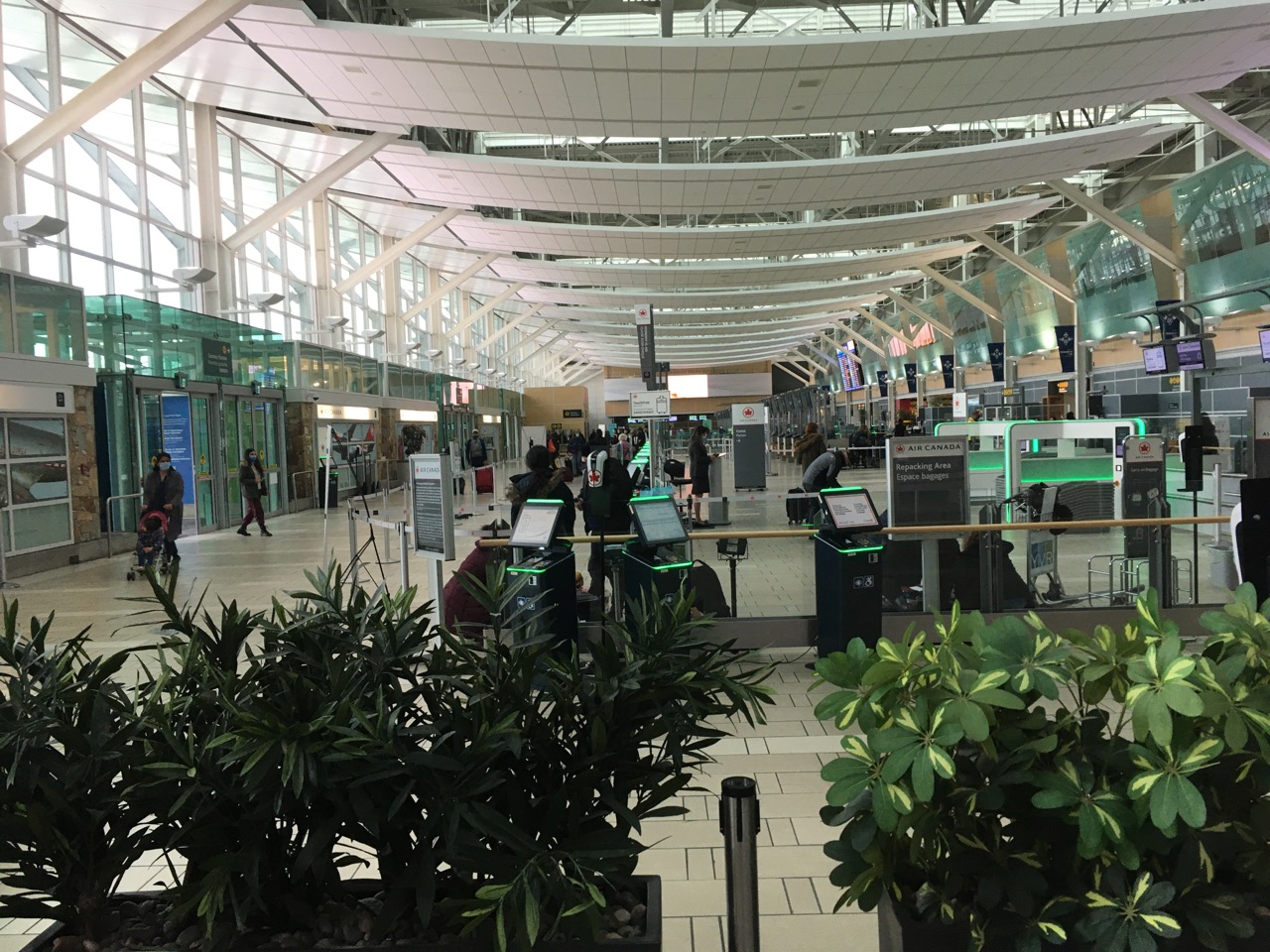 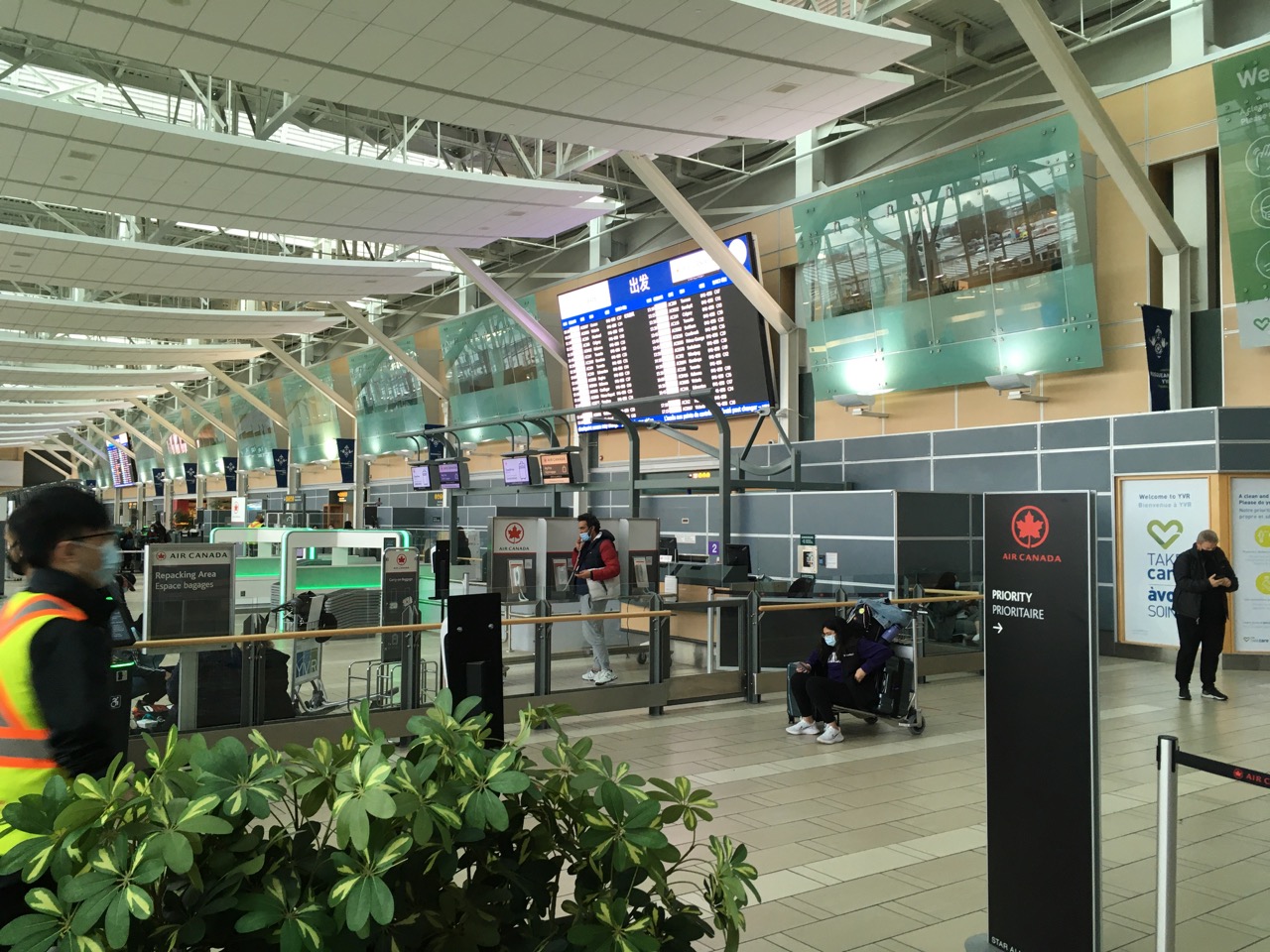 After clearing security it was a short walk to the Maple Leaf Lounge.  Due to capacity restrictions we had to wait only five minutes before we were admitted into the Lounge.

The check-in desk to the lounge is immediate upon entering as the lounge is located upstairs (or via elevator).  Once upstairs we found seating in the dining area.  The reason for the restrictive entry was due to fewer seating options available as part of pandemic related restrictions.  Even with the capacity restriction, almost all seats were occupied, or quickly occupied during our time in the lounge.

Here are a few pictures of the lounge (washrooms are located near the stairs), one bonus is that the lounge had a view of the gate we were assigned.  We even got to watch the 787 arrive prior to us leaving the lounge where we joined a very full boarding area. 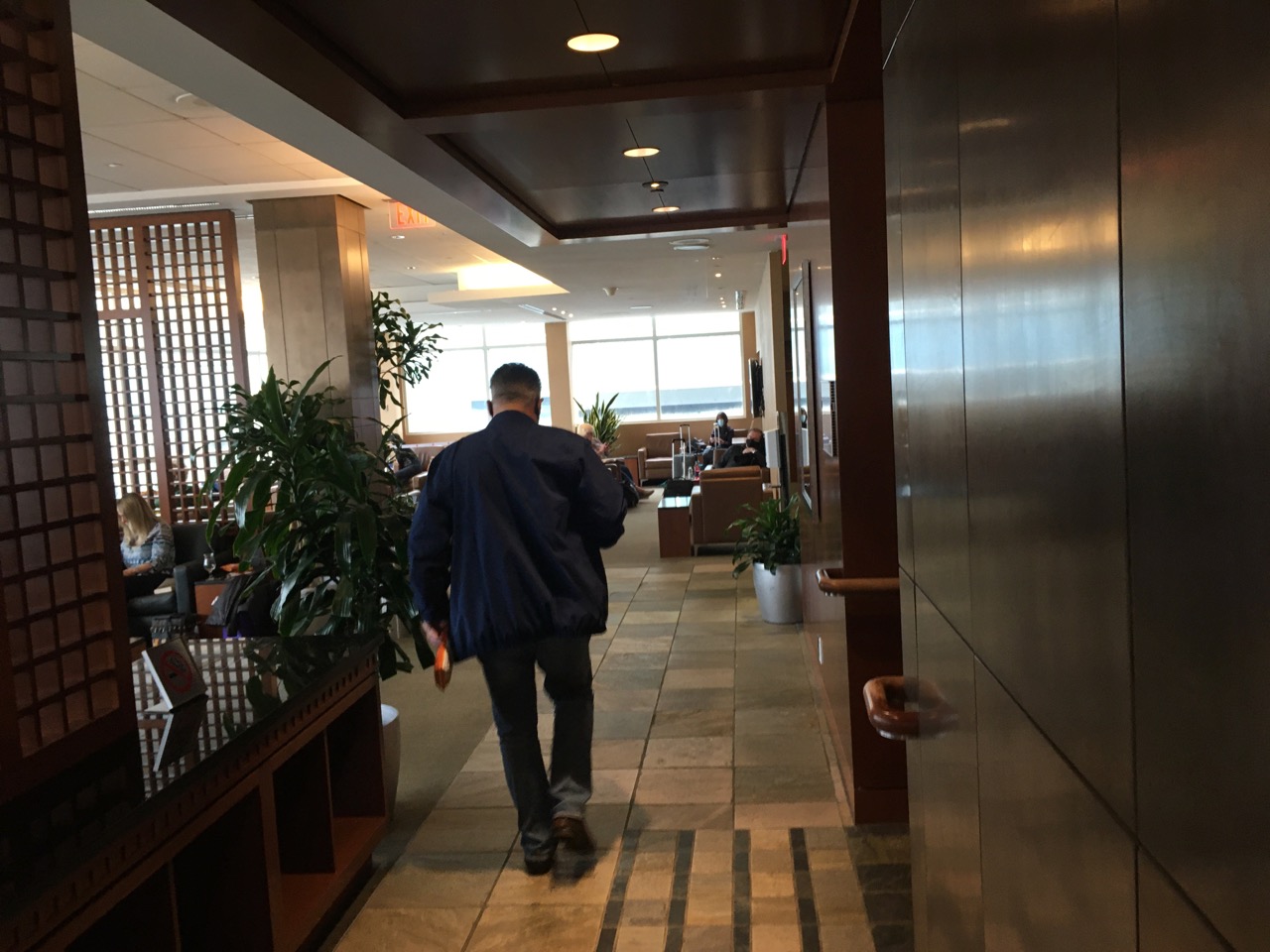 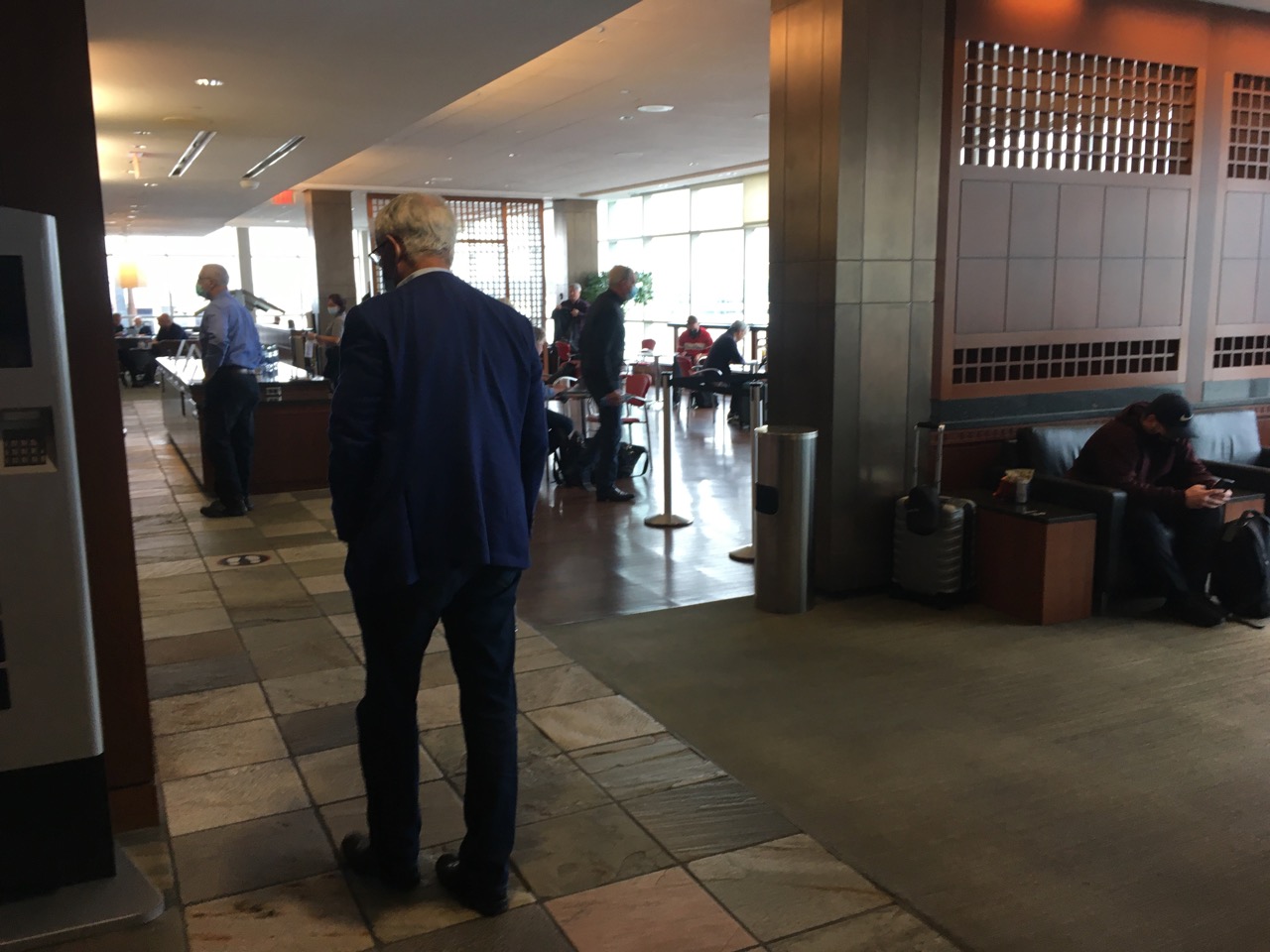 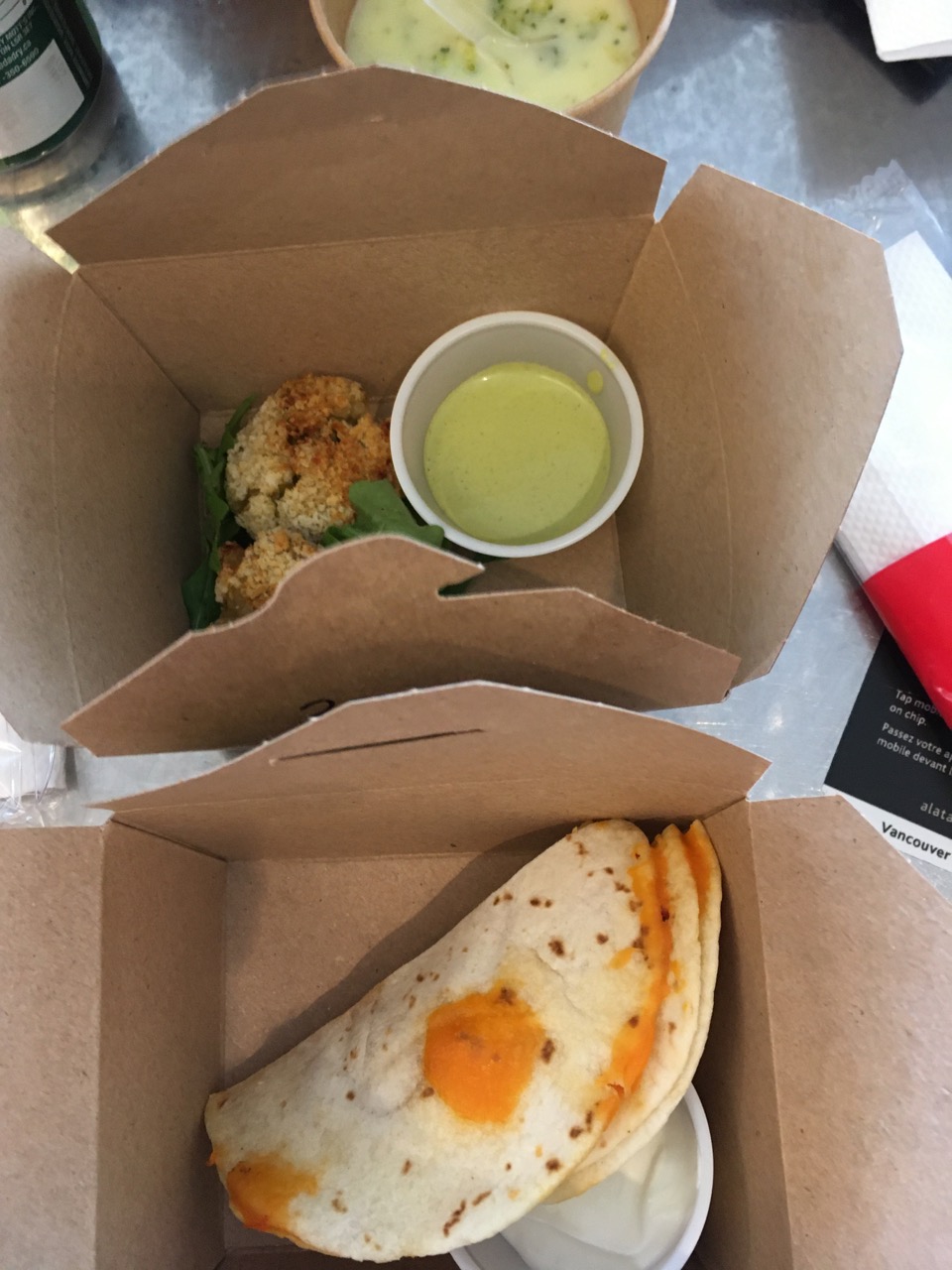 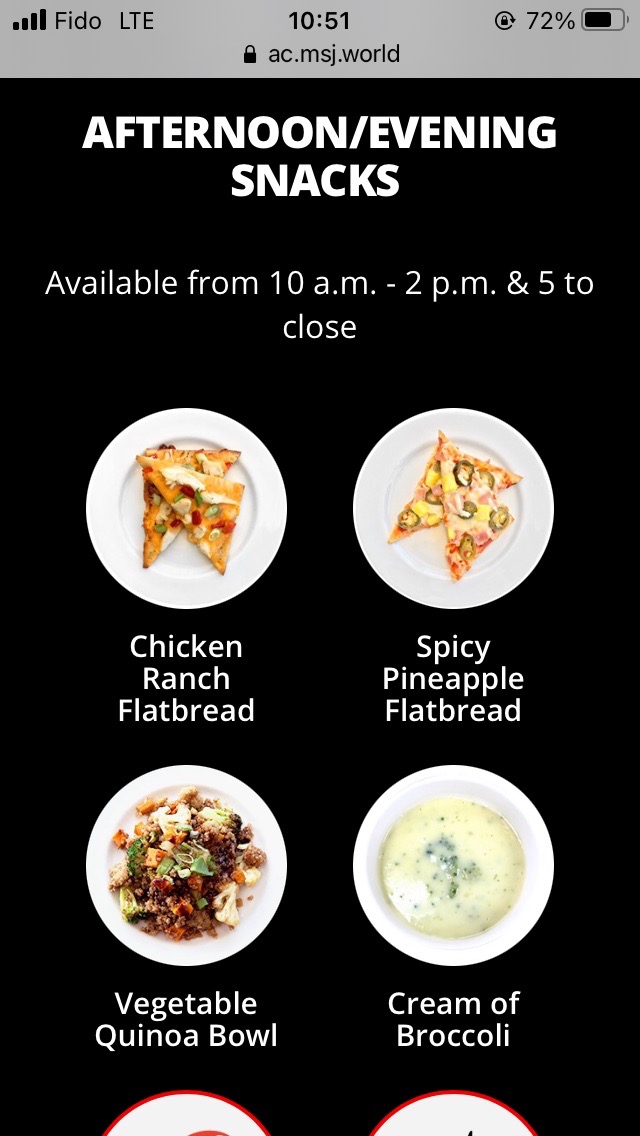 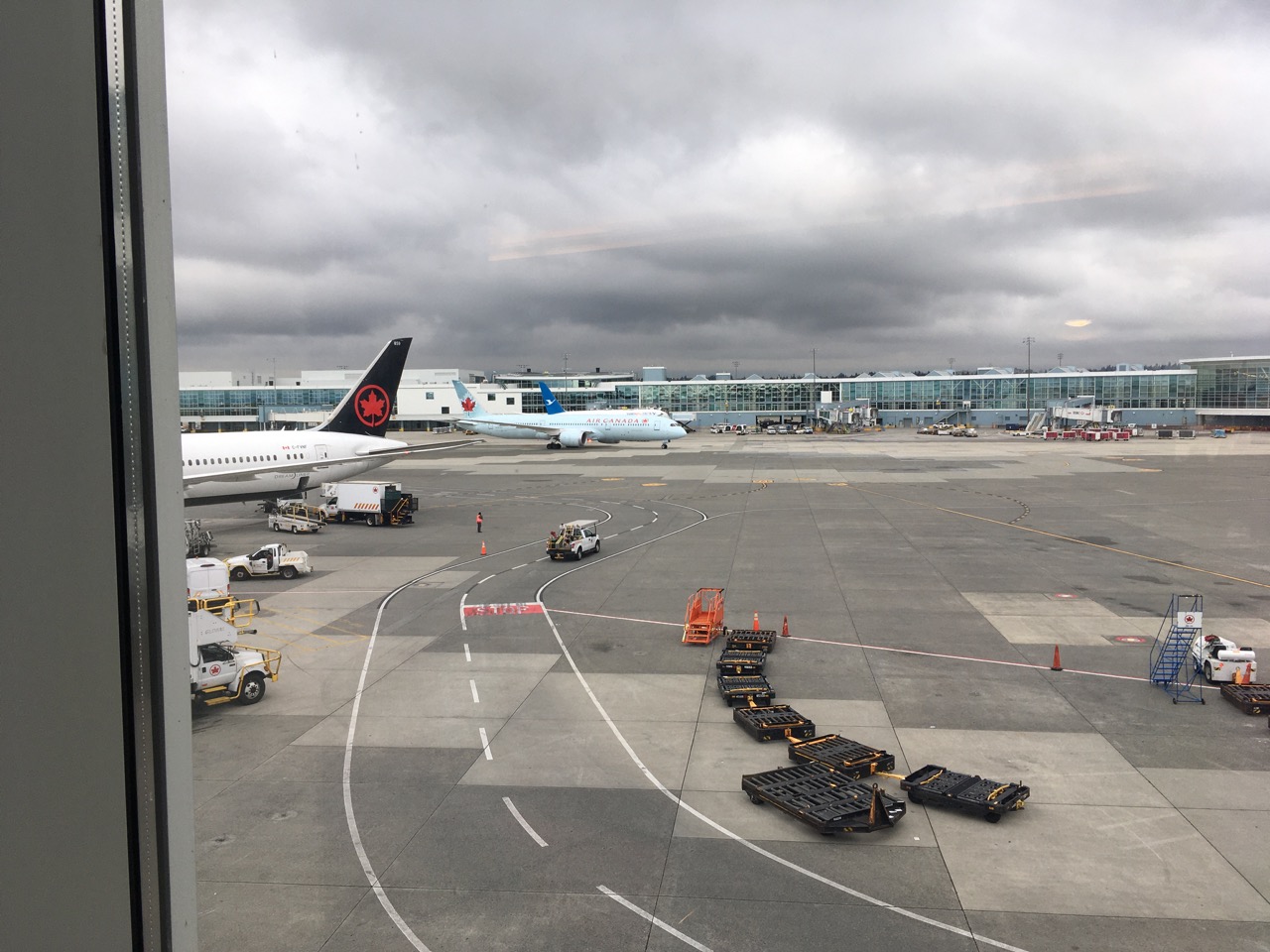 Before boarding began, the gate agent made several announcements, including multiple reminders that this would be a full flight.  When boarding began, we made our way to row 42 of the 787-9 and I noticed that the overhead compartments at the back are filled with supplies!

The red bins were labelled “ground delay snacks” complete with a use-by date.  Additionally, if you’re flying a 787-9, watch out for row 43 as the configuration has that row without a window. 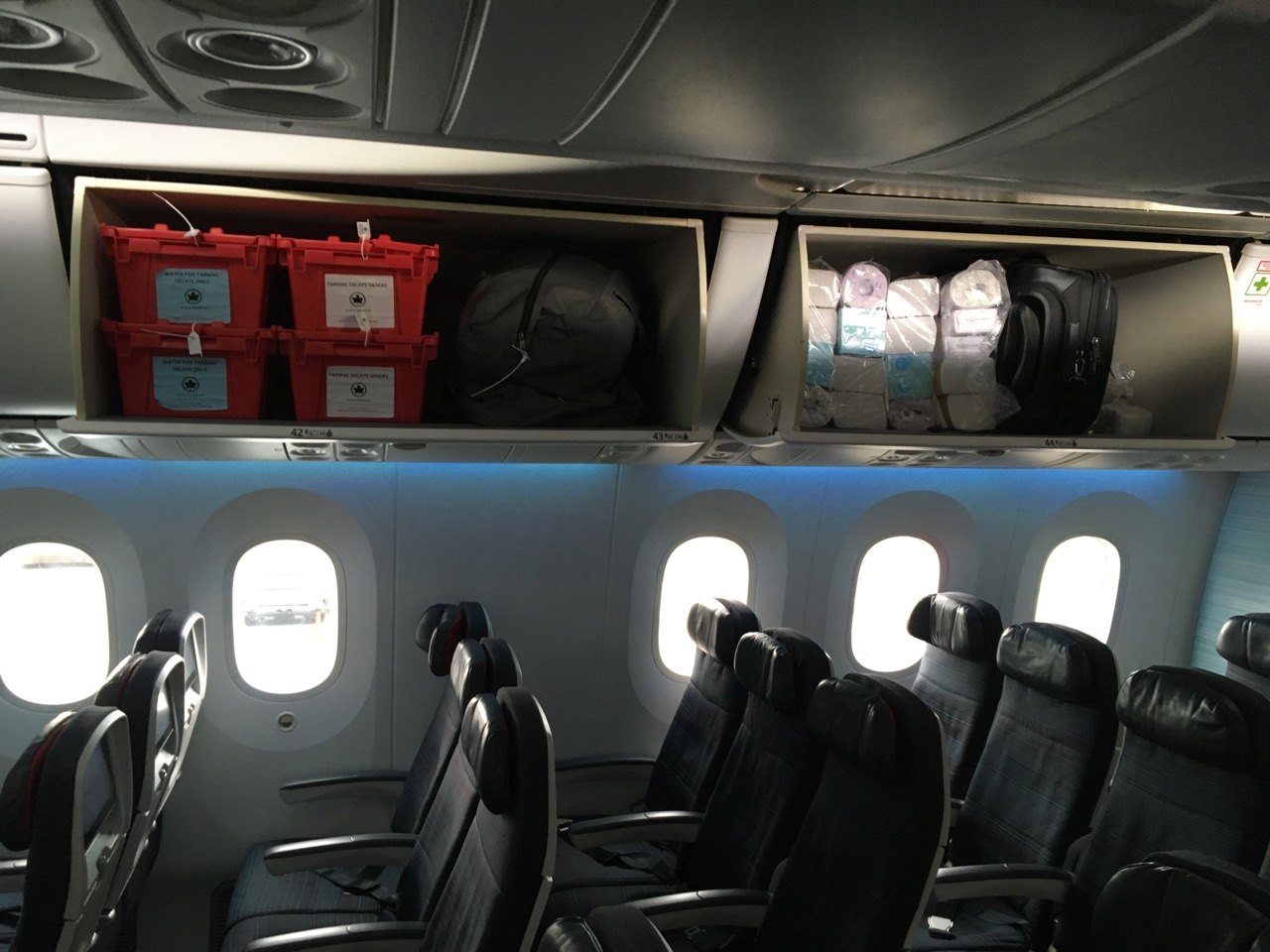 Economy seating on the Air Canada 787-9. 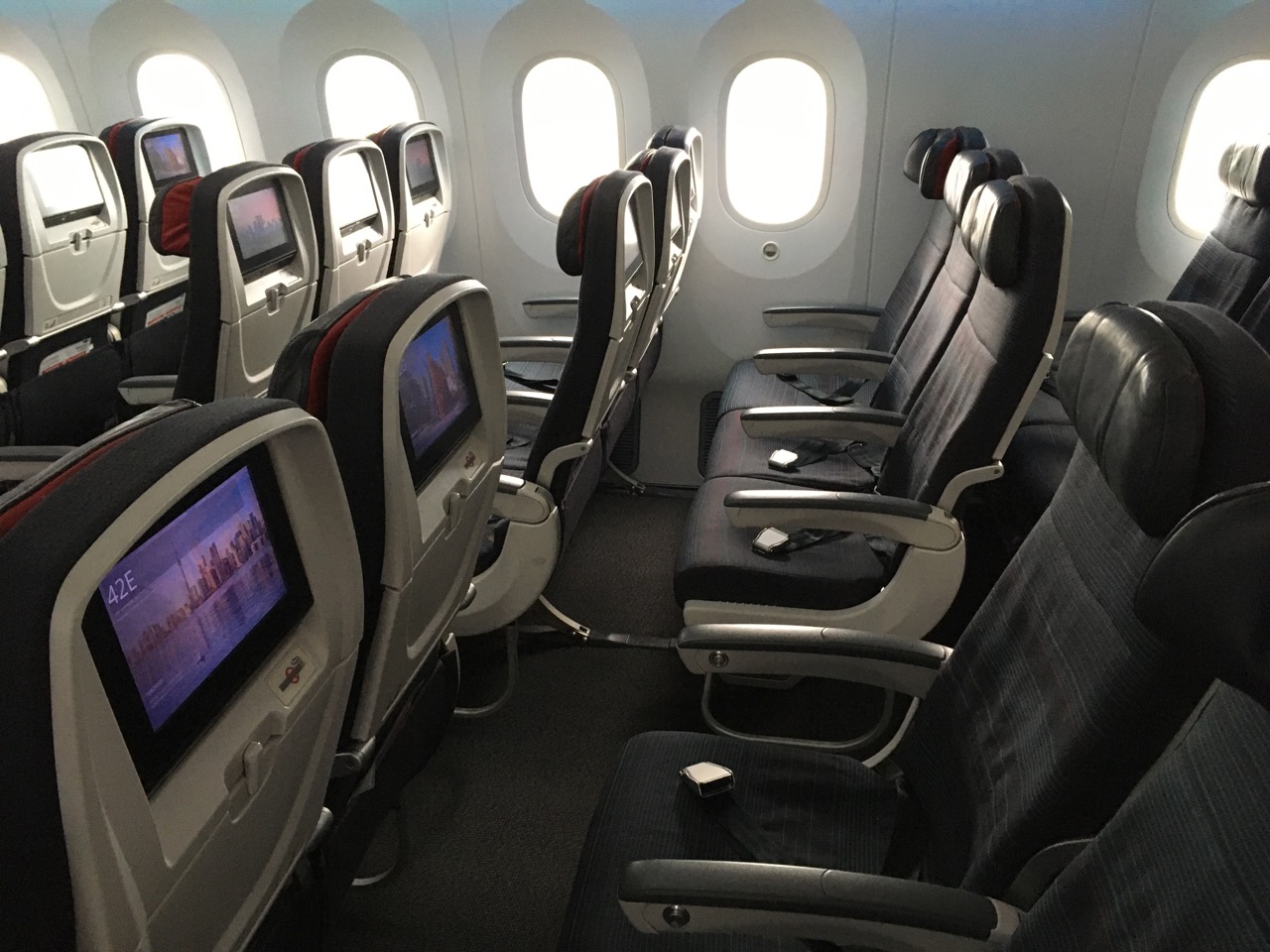 Boarding felt like it took a long time, largely because boarding was still occurring as our scheduled departure past.  Sure enough, the plane was full and we were able to switch to Little Miss a window seat. Only later in the flight did we learn that the person who agreed to the switch was on her honeymoon, and her husband was seat in the window seat in front of us.  We joked immediately “Do you want us to move so that the two of you can sit together?”  They declined and replied along the lines that a few hours of watching TV alone is okay.  They we visiting from the UK, we tried to give them additional ideas of what to visit in the Toronto area.

A gallery of pictures from the flight:

Our flight was delayed, however once the ground crew appeared like this we finally pushed back from the gate to our next delay — an Air Canada 737 Max aircraft blocking the path.  After ten minutes, it moved out of the way and we were airborne 22 minutes after initial pushback.

This was the only day of our trip in which the weather was mostly clear in Vancouver.  The departure route had a westbound takeoff towards Vancouver Island before turning and heading east toward Toronto.  This enabled a final view of Vancouver.

Nothing remarkable about the service on the plane.  Buy-on-board was available in economy.  The flight was smooth.  We landed in Toronto at 8:18pm, had a ten minute taxi to our gate at the end of the terminal 1.  The benefit of the long walk through the terminal was that our bags arrived in less than 10 minutes. From there it was clear sailing to the parking garage and drive home.  It was a great long weekend, and made me look forward to our next trip — our first international flight since the COVID pandemic was declared in March 2020.