Our flight landed and taxied to a gate without delay. For us continuing onward we could leave our carry-on onboard and were then informed to return to the gate in 30 minutes. What can you do in 30 minutes?

As we exited the plane a new crew of KLM flight and cabin crew awaited to prepare to board for the next 2 hours to Jakarta. During our short stopover we realized a few things about KLIA:

Security is at each individual gate, and air conditioning of any effectiveness is also at the gate. Whatever air conditioning existed in the terminal didn’t seem effective enough for us. Being one of the first off the plane ensured that we didn’t have to wait to use the bathrooms just inside the terminal. As KLIA employs a mix of western and squat toilets, being first allowed us to have our choice.

Amber wasn’t feeling great and the heat and humidity in the terminal didn’t help either. After a short tour of the few stores by our gate we returned and got in the security line to hop back on. 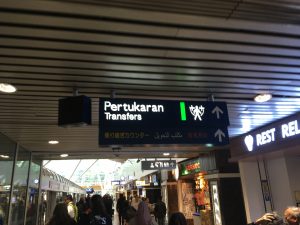 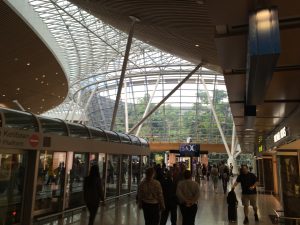 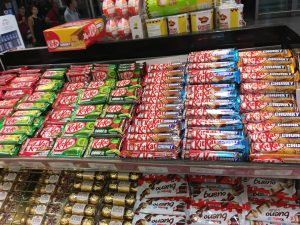 As much as we enjoyed the air conditioning clearing security, our wait in the holding area was short and we were happy to hop back on the plane once boarding commenced.

Onboard we talked with one of the cabin crew of the scheduling involved in this series of flights and they remarked we “work the flight to Kuala Lumpur, have a day off, then we work Kuala Lumpur to Jakarta and its return. One last day off and then we work the return flight to Amsterdam. So we are away for 7 days in total.”

We settled into our seats and soon enough the flight was ready for departure. 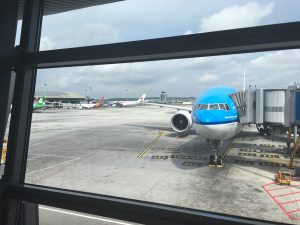 Our flight departed on time and the taxi to the runway afforded us a view of the gigantic Antonov plane.  It’s not everyday to spot a plane with 6 engines.  Sorry for the pictures not being the best quality.  I just used the smartphone camera for them. 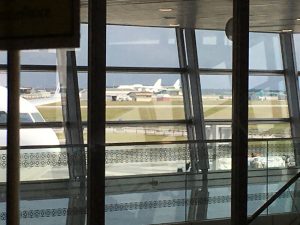 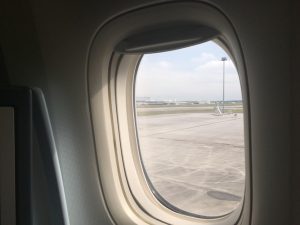 Our taxi stopped short of the runway to allow three planes to land including a Malaysian Airlines A380. That was a neat sight watching it come in and land.

Once it cleared the runway we entered the runway, turned and had a quick take-off. The instant the seat belt sign was turned off the crew hoped to work and they were busy!  Here’s the menu for the flight: 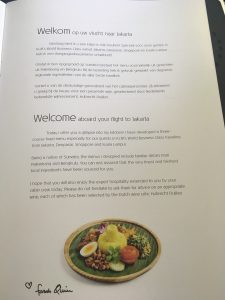 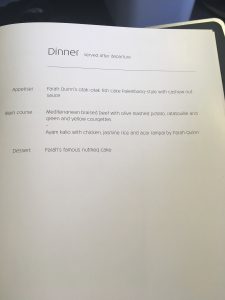 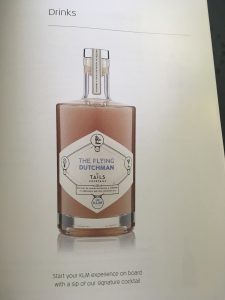 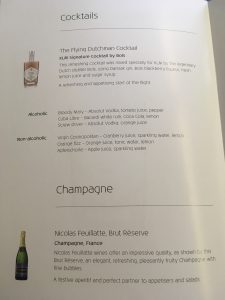 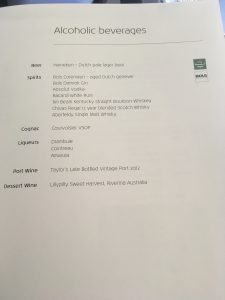 Delivered on a single tray was our full meal. The fish cake wasn’t up my alley and the beef, though good was devoid of any moisture. My dry mouth wasn’t having any of it. I did happily down the bun and dessert without issue.

Being the adults that we are, I watched Cars 3, while she watched Trolls. I should have asked the kids in the family sitting in row 2 what they thought of our movie choice. 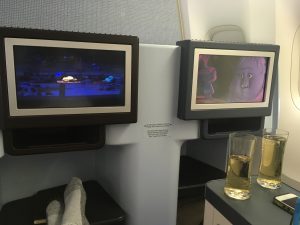 The view during the flight appeared spectacular. Lush forests and tropical waters.

Our approach to Jakarta began soon enough and after selecting our two houses and additional canal house shaped chocolate we prepared for landing. Approach and landing at Jakarta was smooth and we taxied for a while given we landed on a runway far from our gate, which required us to cross the terminals. 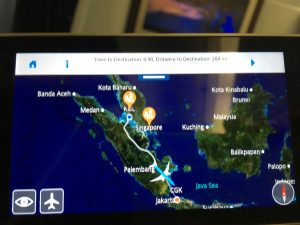 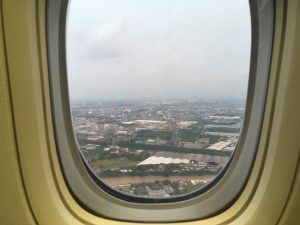 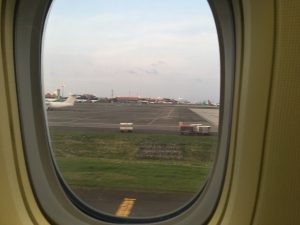 As we completed our taxi, we stopped at a gate for terminal 2. It was easy to tell because terminal 1 & 2 resemble local architecture and terminal 3 was a shiny monolithic of massive glass.

We walked off the plane and I thought we’d have an experience transiting through Jakarta. That was laid to rest as ground staff for Garuda’s connecting flights greeted us and 10 other Australia bound passengers. We took quick pictures while we waited for our international transit began. 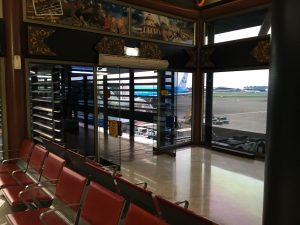 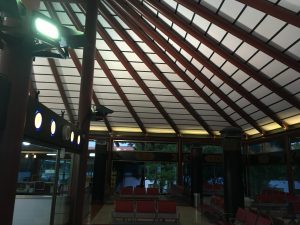