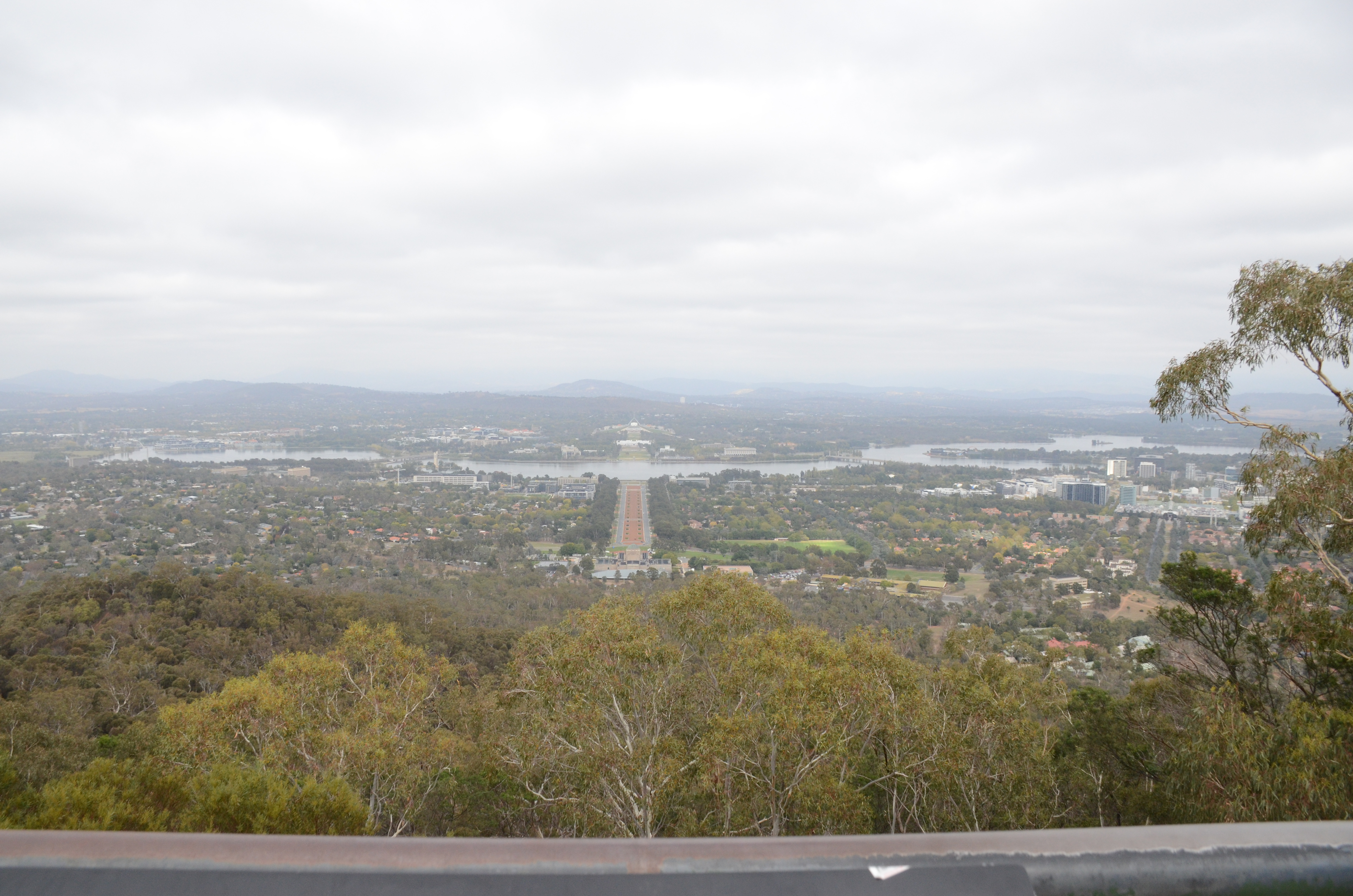 With one full day to explore the city, we certainly made the most of it.  That was thanks in part with the jet lag getting us up and ready for the day before our first stop was even open! 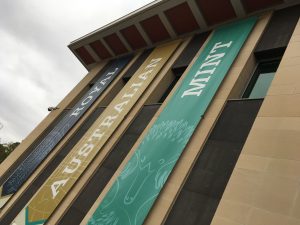 Our jet lag continued to wake us up at 6am without the aid of daylight, nor alarm clocks.  After a filling breakfast we made the short drive to the Royal Australian Mint.  The drive was so short that we arrives 10 minutes before they opened.  Amber easily passed the time taking pictures of the Cockatoo that was hanging around the parking lot. 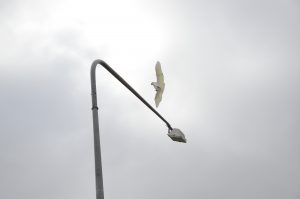 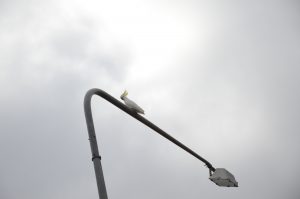 Once inside, the public space is split over two levels. 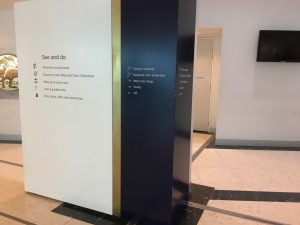 The gift shop, bathrooms and cafe are located on the main level.  The self-guided tour, as well as the areas to view the Mint in action were upstairs (we did spot an elevator).

Having this large display of coins at the entrance certainly ensured you knew what is produced on site:

There is a short 5-10 minute video to watch once you get upstairs.  The video was informative in terms of what the Mint does, as well as what to expect through the rest of the tour. Overall, the space on the second level is a single large space.  The space is well organized as it takes your through the history of currency in Australia since Europeans arrived, history of the building and its opening in the 1950s.  There were large sections dedicated to the many coins that have been produced on site since the Mint was opened.  While we watched the welcome video a school group passed us.  We proceeded to listen in on their tour of the Mint while we looked at the many coins on display.

The highlight of the tour was being able to see the mint in action.

We enjoyed the silence once the school group moved down to the main level, leaving us alone to watch the regular coin side busy at work.  Once satisfied, we returned to the main floor to see what was available in the shop.  There was no shortage of special coins available for sale, such as a line of Ford vehicle coins, or animals: 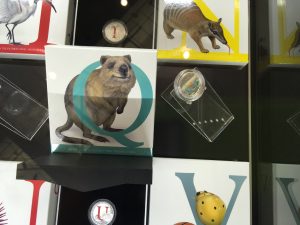 With a few purchases complete, it was a straightforward drive from the Mint to Mount Ainslie, where we got more views of the Parliament building: 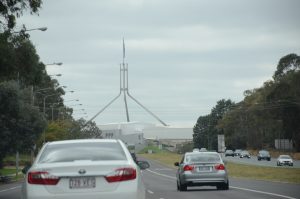 We drove the Anzac Parade in both directions.  This was neat as the Parade is filled with memorials.  Here are the ones we saw on the way up from the lake to the War Museum. 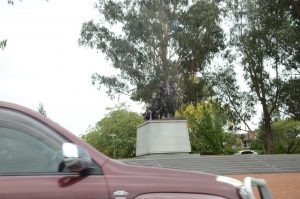 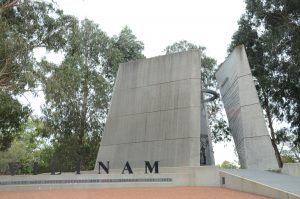 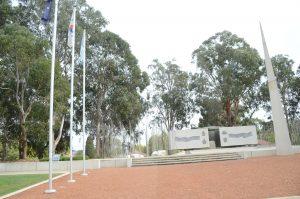 With ANZAC day taking place the following week, crews were already busy setting up a stage and seating for the memorial service.

The name is misleading as it is more a scenic lookout versus a full-fledged mountain.  That made the drive up to the lookout simple and straightforward.  Upon arrival the lookout was popular, not only for tourists but also for a group of the Australian military. 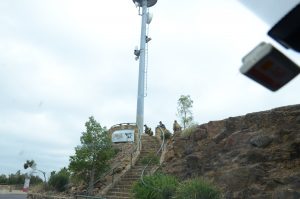 Amber took time at the lookout to make friends with a bird: 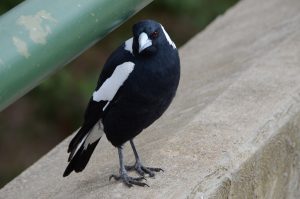 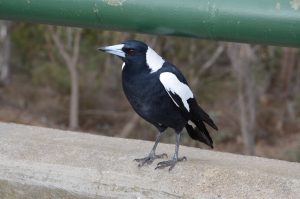 After Mount Ainslie, we took Anzac Parade to our next stop.  Amber took pictures of the memorials on the other side of the road. 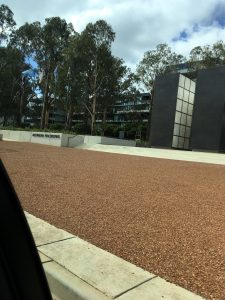 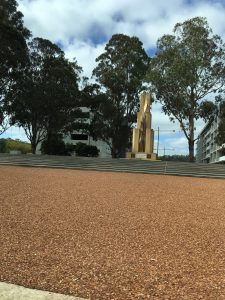 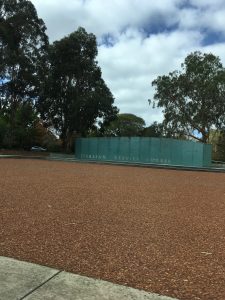 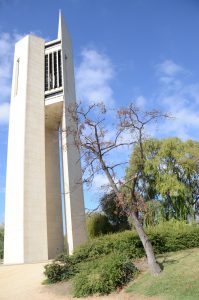 The National Carillon is located beside the lake.  We arrived in time to listen to the end of a practice session as the scheduled concert was to occur in the afternoon. 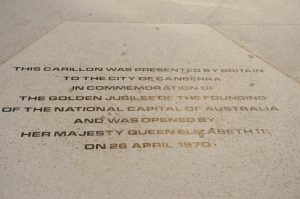 Although we didn’t stay for the concert it was neat to listen to bells playing with the only competing sounds being from the birds in the area. 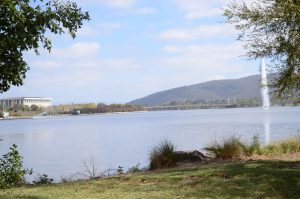 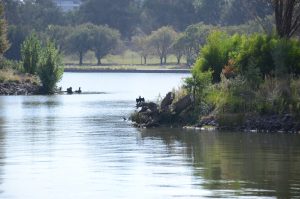 We did come across something that both of us didn’t know existed.  I spotted this critter swimming near the edge of the walkway.  I joked to Amber, “It looks like a rat.”  After a few minutes of searching online she glanced at me and confirmed it’s a type of rat, a water rat. 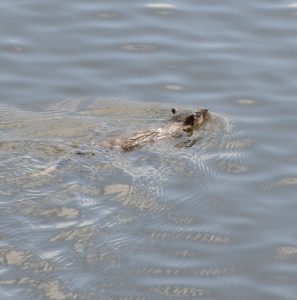 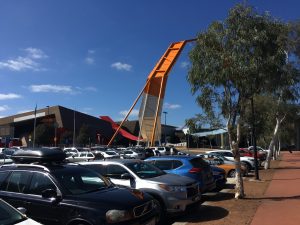 We travelled along the lakeside to the Australian Museum.  By the time we arrived we headed straight to the cafe for lunch.  We both enjoyed lunch, and then ventured through the exhibits.  The museum is divided into four sections, and after the first section our jet lag returned and we faded fast.  Before we left the museum we did get to see some interesting items: 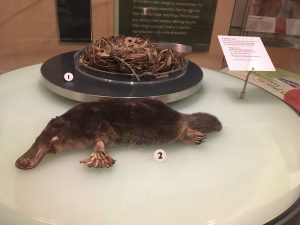 Platypus & Europe.  Supposedly when this animal was first described to Europeans, they didn’t believe such an animal could exist and had to be a hoax. 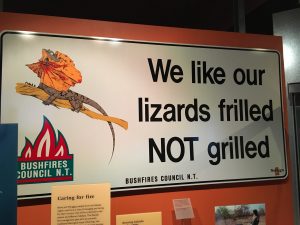 There was a whole section dedicated to wildfires, and its impact to the bush and wildlife along with an area regarding major fires that threatened and caused damage near major cities over the years.

One area of the museum that truly showed the impact of humans on the environment was the section regarding invasive species on the continent.  Single-handedly the best example were rabbits.  According to the display, rabbits were introduced by a farmer in the 19th century with the intention of improving the landscape.  The result was an animal that thrived on the Australian continent.  They spread up to 130 km per YEAR. 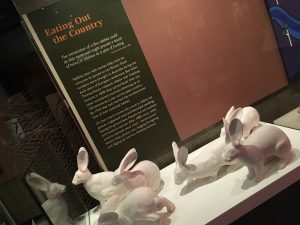 We had passed many sheep farms on the drive to Canberra, this display on selective breeding shows how things can change: 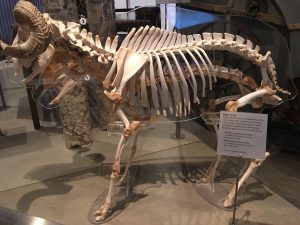 The two sheep skeletons show the change from a merino sheep from the 19th century, to the typical size of merino sheep in Australia today.

To me, I started to think that a dictionary, or thesaurus was not with the first Europeans exploring the continent.  I’d really like to have heard the conversation of how this became the plant’s name:

Exhausted from exploring the museum I spotted this and was reminded of the saying “roll up the sidewalks.”  Looks like this is where it starts in Canberra! 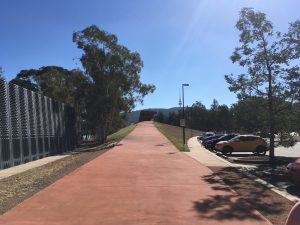 Upon returning to the hotel the rest of the afternoon quickly disappeared and we had run out of the day to complete any more sightseeing in Canberra.  Our plan for tomorrow, a drive to South Australia.