To help split up the many things we saw during this day, here was our fifth and final stop we checked out along the Great Ocean Road.

Parks Along the Great Ocean Road

First up, a reminder of our plan for the day:

These posts had focused on what we saw as we drove along the Great Ocean Road, the fourth arrow (middle) in the map.  This post is about the location near the blue star, The Twelve Apostles, and the remaining drive to Melbourne.

Our bladders were happy between these parks as we drove through a small town where we easily found the public toilets. 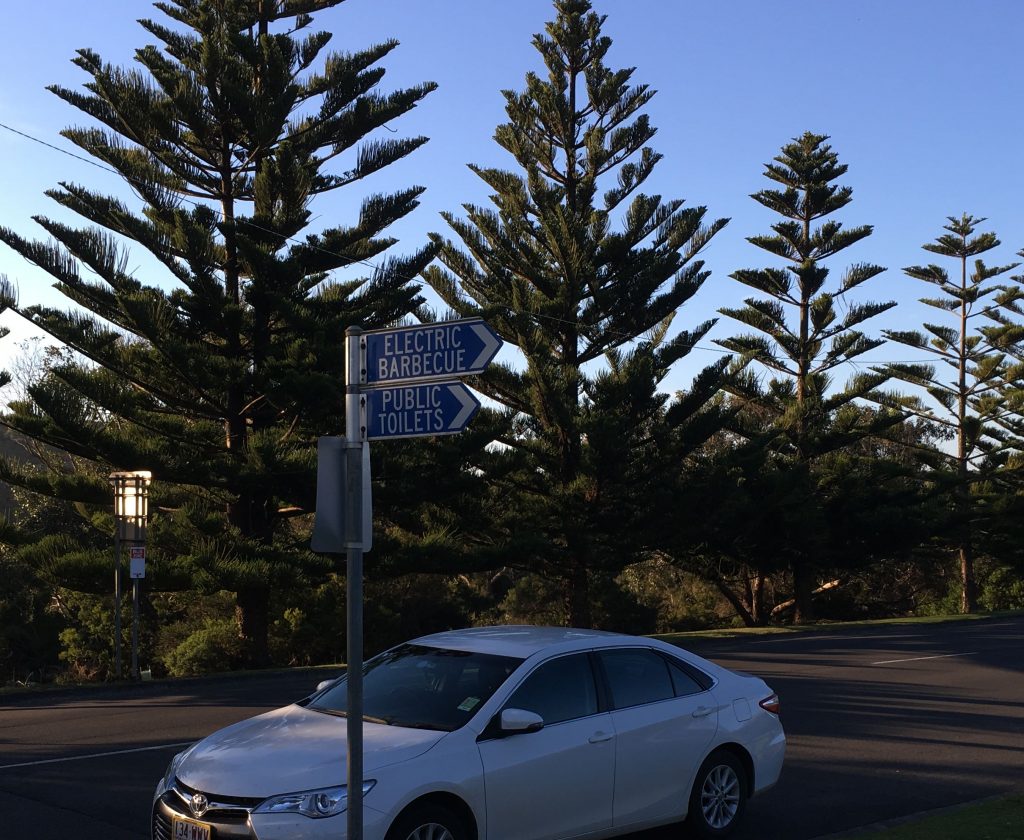 The drive in town wasn’t too bad, however with the combination of the bio break, and the sun beginning to prepare to set this drive between parks was under 30 minutes.

After spending a day visiting parks that had few crowds, easy to park and access — this stop was exactly the opposite.  This site is so popular that the parking facilities are on north side of the road, comes complete with a visitor centre, pedestrian underpass access to the site.  We arrived so late in the afternoon that the visitor centre had already closed for the day, however many tour buses and cars had filled the parking lot.  In the back of the parking lot was a helipad for those who wanted a bird’s eye view of the parks we had taken in. 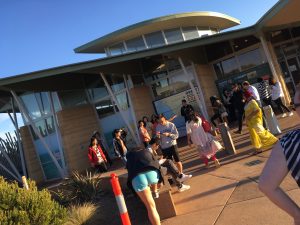 There are two lookouts once you navigate the underpass to get to the ocean. 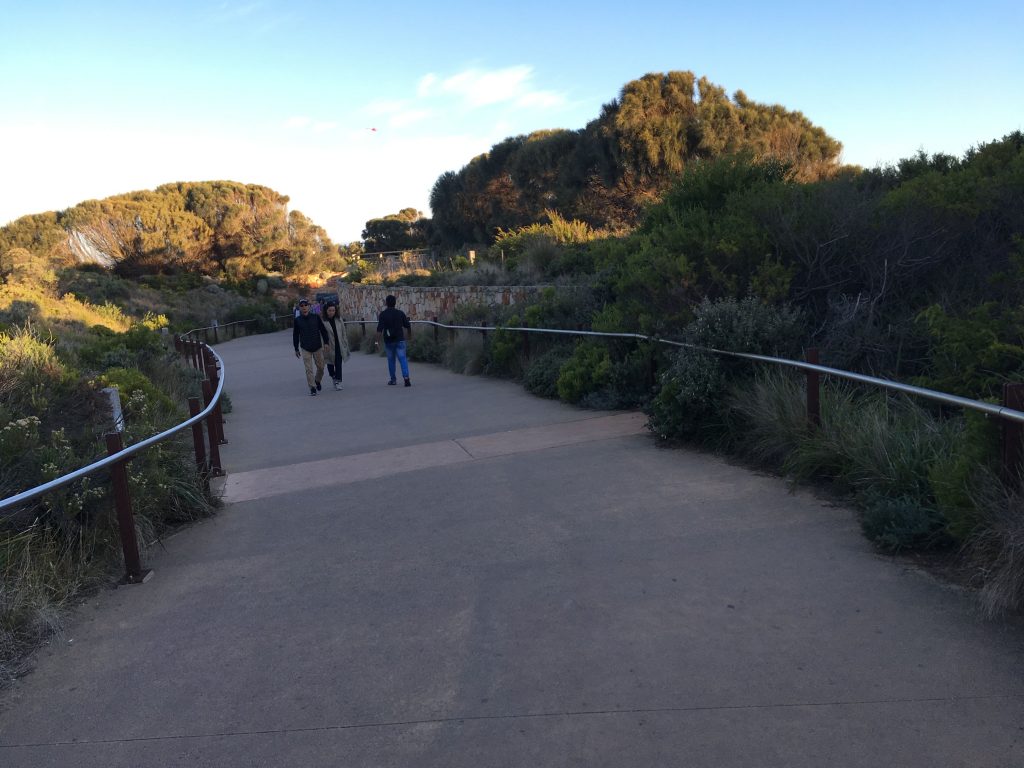 There is one lookout that is close-by and provided ample space for those with selfie sticks and tripods: 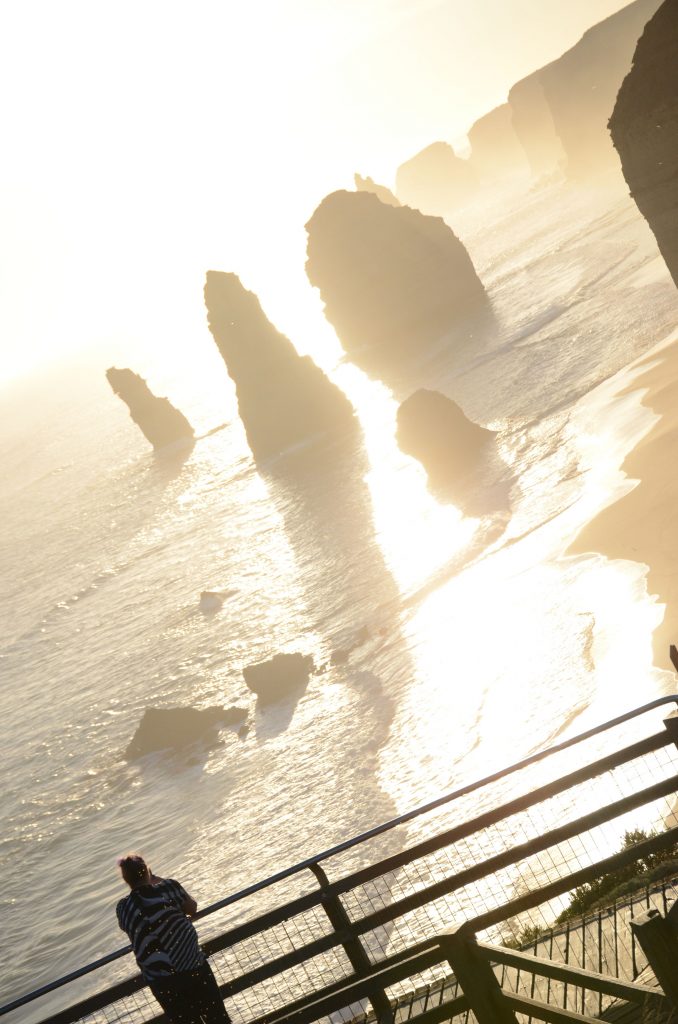 From this spot you can walk further onto a rock outcropping where many more people, complete with tripods, had setup for sunset photography of the 12 Apostles. 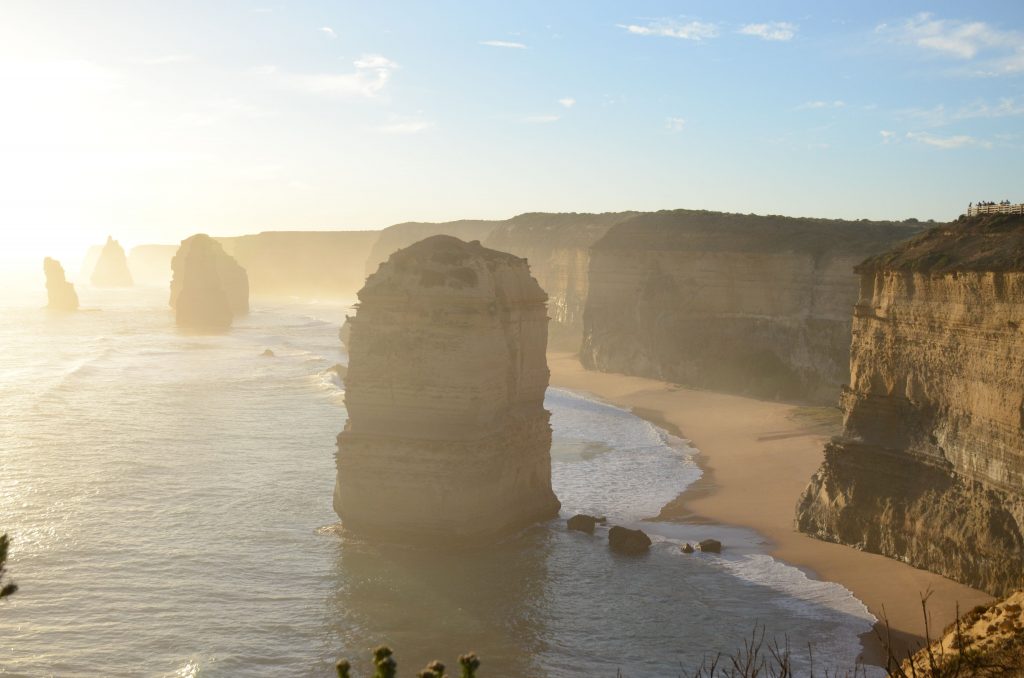 What I thought was lost on many people was the view to the east from the second viewing area. 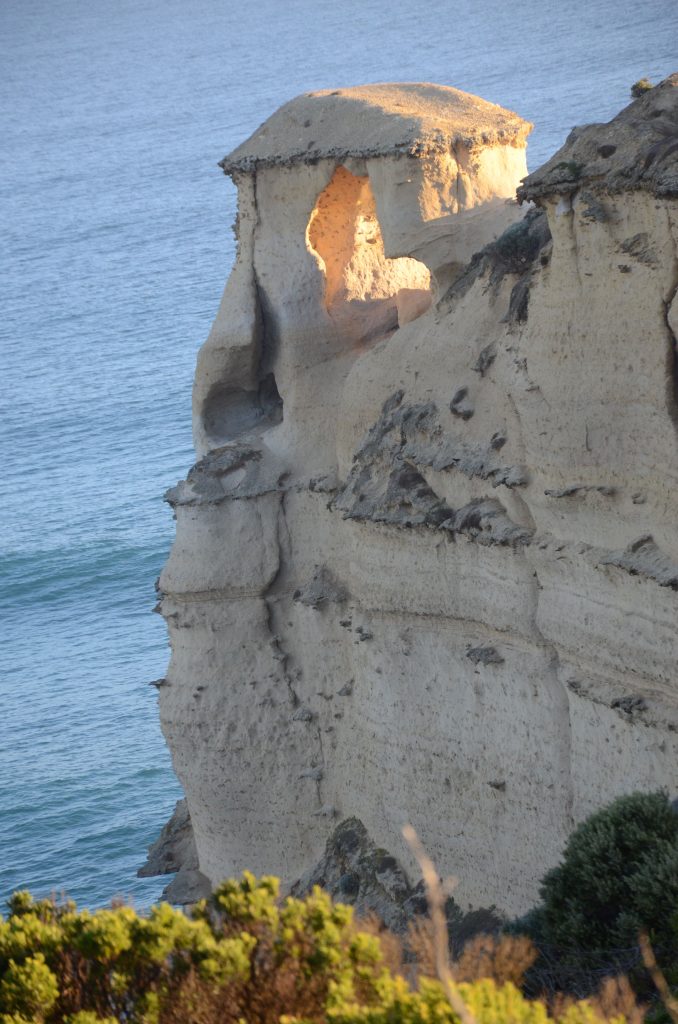 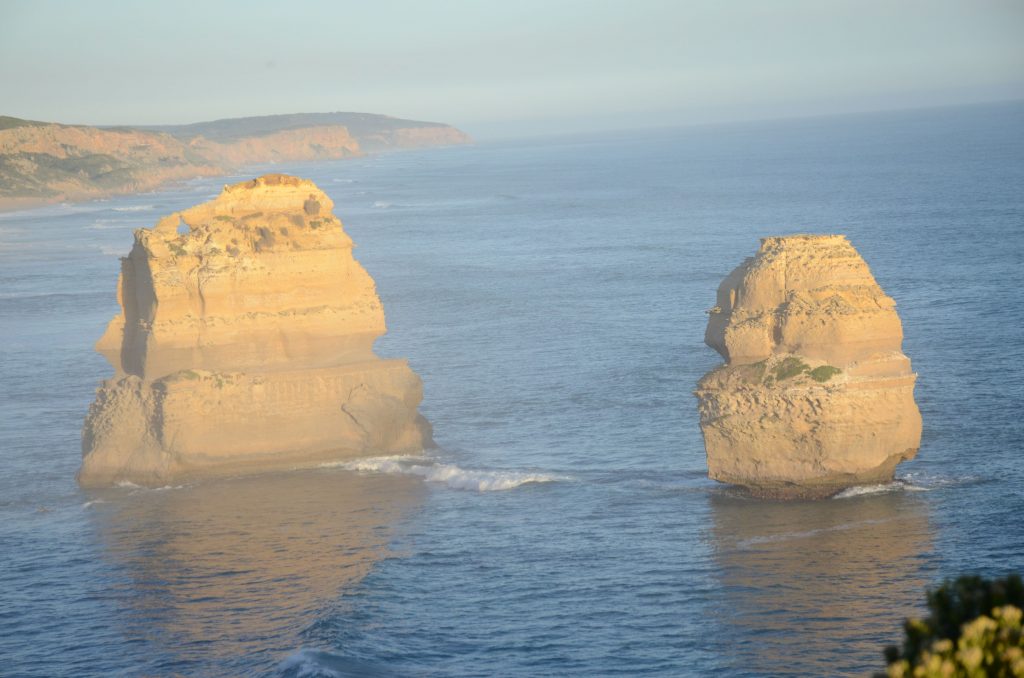 And a third picture of what some didn’t even bother to stop and take in the view.

As this was a popular place, warning signs — that we had not seen at all during the day — magically appeared only at this lookout. 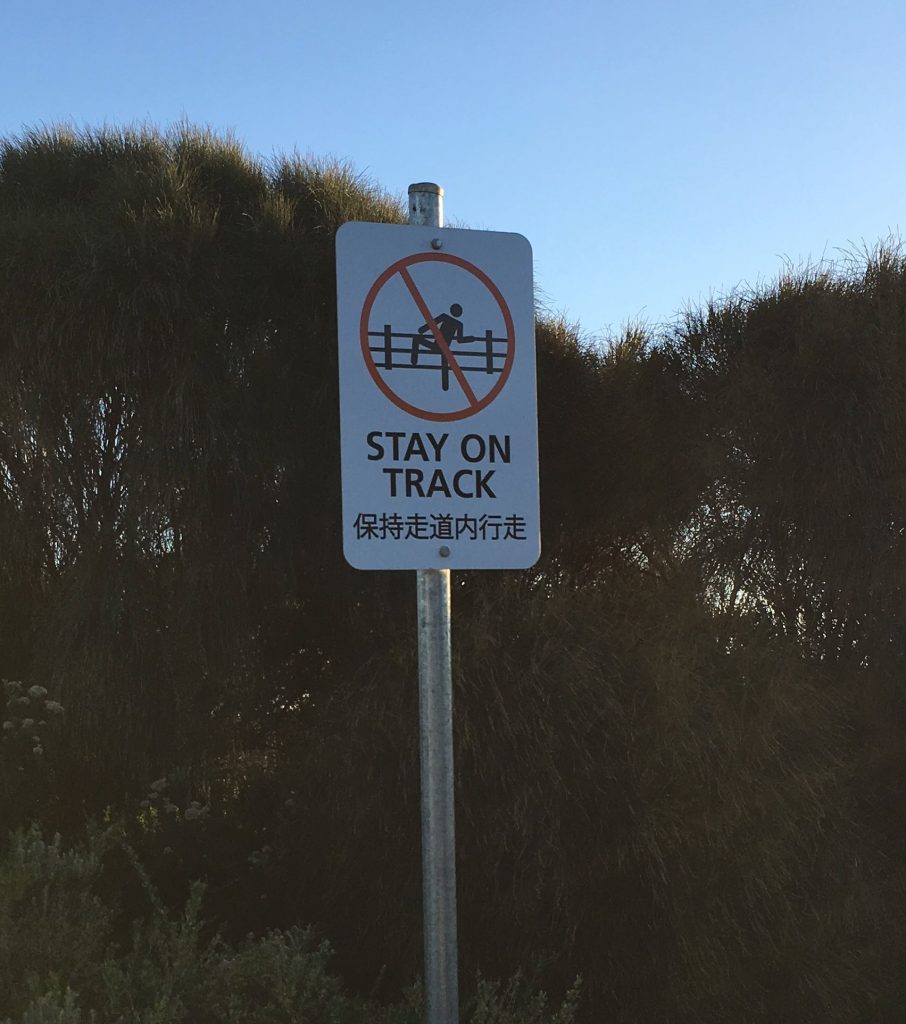 With these grounded, the only option to view from the sky would have been through chartering one of the many helicopters in the back the parking lot/helipad area. 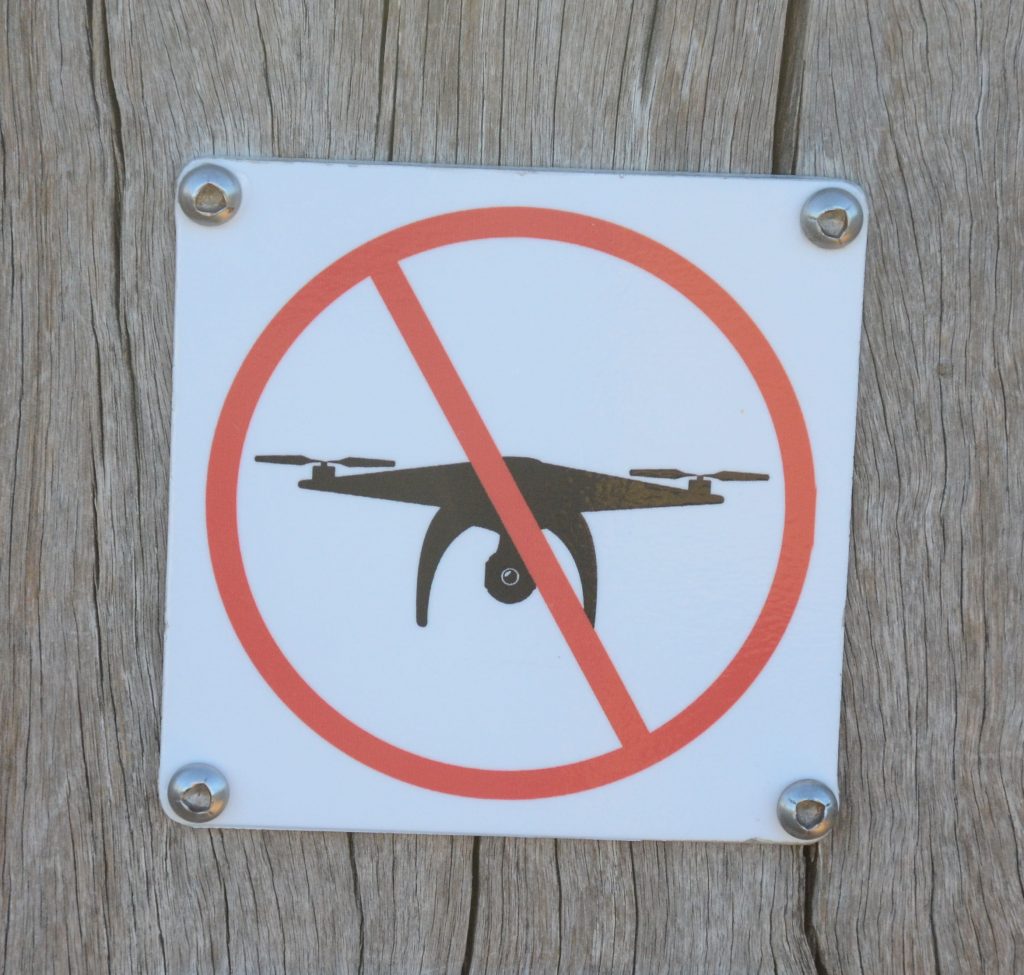 The timing of our visit was great as the mist from the ocean gave our view of the Apostles an extra dimension and some mystery to these rock formations. 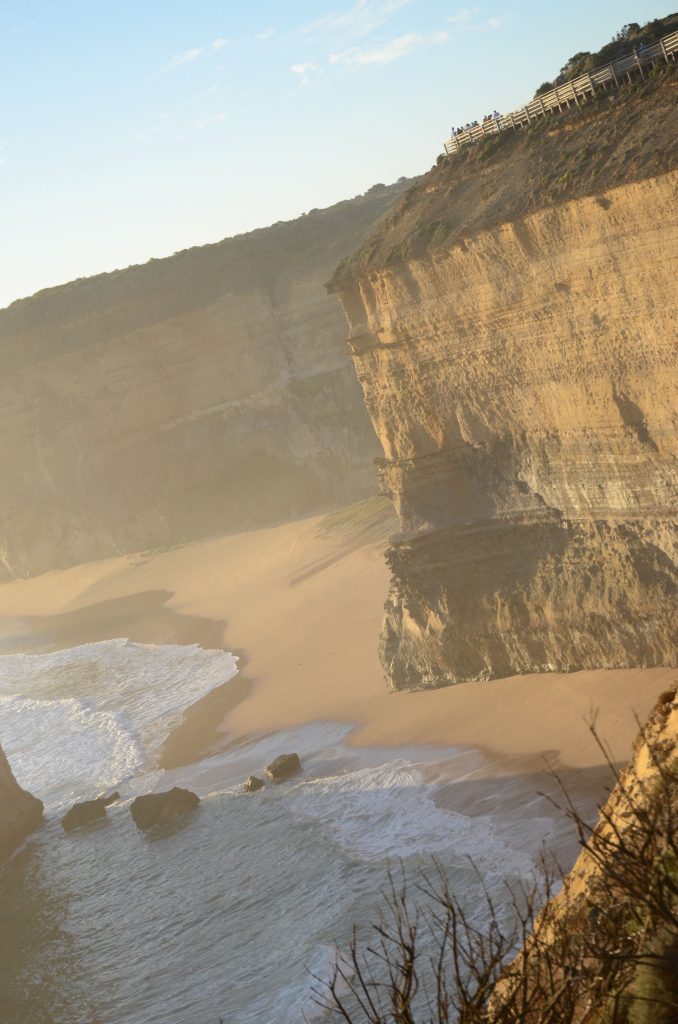 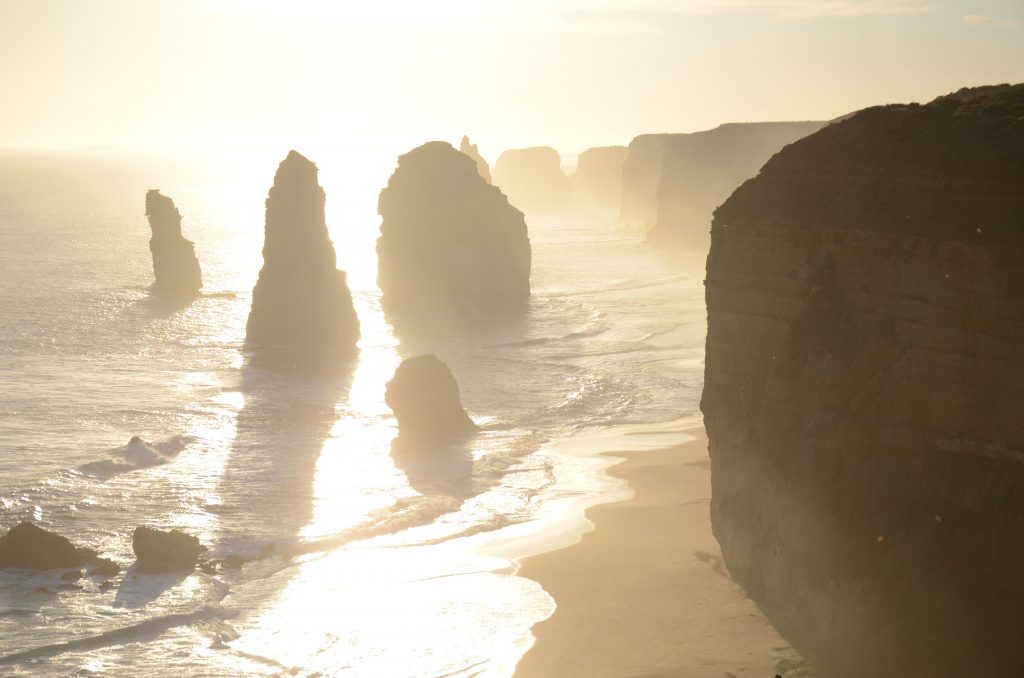 A gallery to sum up the pictures:

Before we left, I took this picture of the many places to see along this stretch of the Greast Ocean Road.  Of the five large site highlighted with pictures, the bottom two right we didn’t visit.  We skipped the Loch and Gorge Park as we drove by it, and didn’t continue east to the next park. 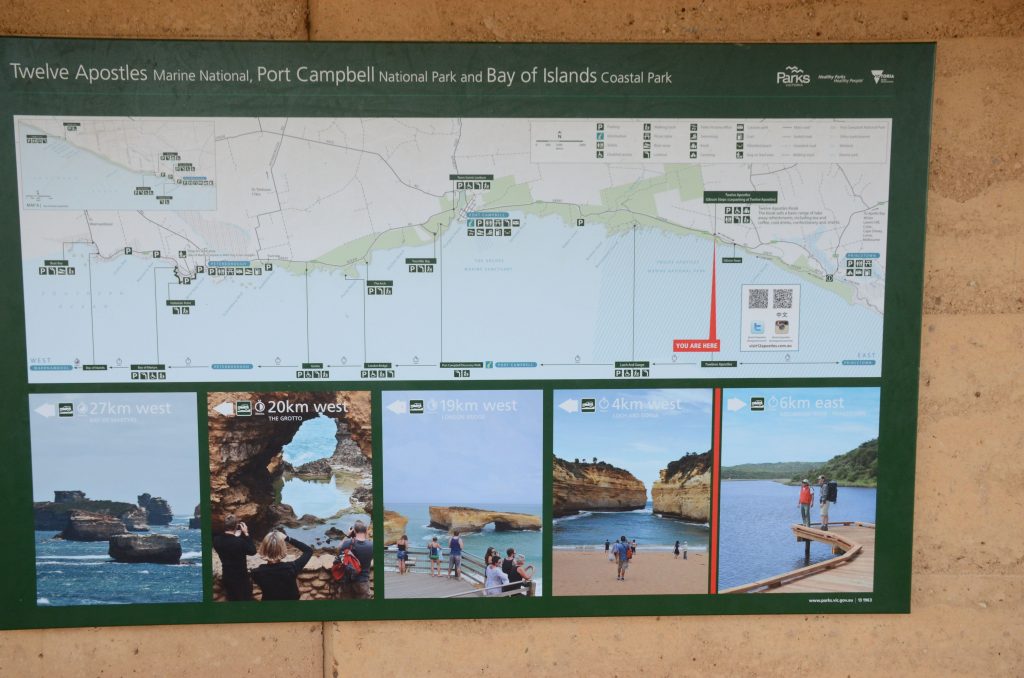 Once satisfied with our time here we returned to the car.

As it was past 5pm, our time on the Great Ocean Road was over.  We had a hotel booked for us in Melbourne, where we headed northeast to Colac that returned used to Princes Highway, A1, to take us back to Melbourne.  The timing worked well as we arrived in Colac as twilight had faded.  We successfully found dinner, where we then returned onto the highway for the remaining drive.
Currently the highway between Colac and Geelong has lots under construction.  Even though it was dark, it felt like the entire section was actively being twinned into a fully divided highway.  Once we entered Geelong though, the divided highway started in earnest and it was clear driving to Melbourne.  Both of us were exhausted upon arriving to Melbourne that instead of complaining about missing a turn to our hotel, we remarked at the bright lights of Luna Park Melbourne as I made a U-turn.  Safely at our hotel we had just logged 1,500 km in two days.  That’s a lot of driving.  And a lot of bugs on the rental car!