The Thursday morning that we were leaving Tasmania, I woke up to an unexpected text message.  It was from Air New Zealand — our carrier for our Australia/New Zealand flights that we had coming up on Monday (4 days away!).  It was not encouraging news. 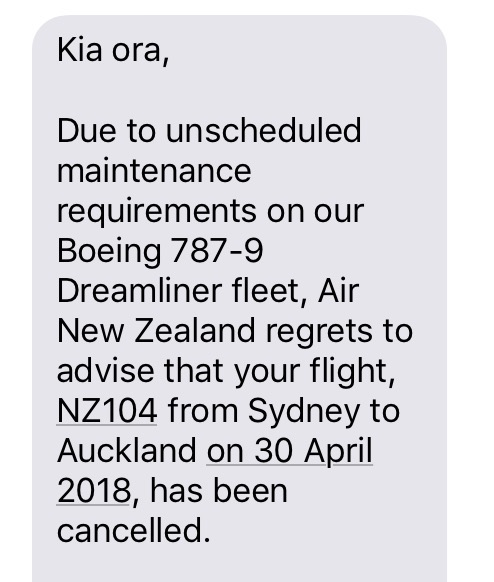 As much as this sucked for us, it’s not as bad as the reason why the flight was cancelled.  The FAA had reduced the maximum distance Boeing 787 with Trent 1000 engines could operate away from airports down to 60 minutes.  Check out the wikipedia entry for details, however the summary was that Air New Zealand who had several of these planes, suddenly could no longer offer any of their scheduled flights.  New Zealand’s geography now made Air New Zealand flight operations very challenging.  The flight time between Australia’s east coast and Auckland is around 3 hours.  Even though our scheduled flight wasn’t on a 787, our scheduled Boeing 777 was now required to operate one of the many routes that the 787s had been completing.

Crap!  This was not good.  Many things went through my head while we checked out of the Best Western Hobart, and headed to the airport for our flight back to Melbourne.  The flight was an Aeroplan reward flight, and I would have to contact Aeroplan to find out about options and alternates.  As well, other possibilities came into my mind:  How would there be sufficient award seats on another flight offered by Air New Zealand?  Would we fly the same day as scheduled?  Should I book an alternate ticket?  Should we skip going to New Zealand? Why did I choose this flight to book separate tickets for each of us?

This quickly became an undesirable option.  Of our 4 nights in the country, all 4 were already booked, with non-refundable rates.  As well, we had booked (surprise!) a tour of Hobbiton.  Very quickly the option of not crossing the Tasman Sea was ruled out.  We wanted to see New Zealand, and Air New Zealand’s choice of engine on their Boeing 787s wasn’t going to prevent us.

We needed a way to get to New Zealand by plane.  On Monday.  From Sydney.

While we ordered and had breakfast, airside at the airport, I called Aeroplan.  The 14 hour time zone difference worked well as the call center was open, even though they still thought it was Wednesday — when it was clearly Thursday morning. 😉  The wait for an agent was short and she was competent.  She confirmed the original reservation, looked up other options for the same day, or next day (no seats available for the whole week).  Unfortunately, their system did not have the cancellation in their system from Air New Zealand yet.  Instead of cancelling my ticket immediately and incurring a fee, I hoped her statement that updates might take 24 hours might occur.  I thanked her for her time and ended the call.  I didn’t like the prospect of waiting as it was Thursday and we are to fly this route on Monday.  The kicker?  Each ticket was booked separately to use up both of our Aeroplan points.  A large part of me thought that if we were rebooked we could end up on separate flights, and potentially on different days.

I spend a lot of time following frequent flyer blogs, forums and websites.  I already knew that my options were any of: Virgin Australia, Jetstar, Qantas, and LATAM.  Remember from the planning post on options, LATAM provided a potential route to Australia via South America.  I booked a flight with Qantas where we would fly LATAM’s 787 across the Tasman sea. Using the Qantas website, if LATAM’s 787s were impacted by this engine issue, I could quickly reach Qantas and presumably get on the next (of many) flights to New Zealand.  The eye watering part was that being 4 days away from our departure date I booked a refundable ticket. For those who don’t fly often, a refundable ticket can cost between 2 to 5 times more than the lowest fare. I closed my eyes, press purchase and *poof* we had confirmed tickets for April 30th.

As I’m writing this post trip, I can provide the resolution and answer to this challenge.  The following evening (Friday night), I checked my email and found the emails to brighten my day.  Aeroplan had rebooked us on an Air New Zealand flight, in business class, on the same day.  The only downside was that instead of arriving at 6pm it would now be midnight when we walk on New Zealand ground.  All of my concerns had evaporated, and I cancelled the Qantas ticket. Whew!

I wasn’t as concerned by the Auckland to Brisbane flight as we were on the same third ticket issued by Aeroplan.  Most importantly though was that as part of the schedule changes Air New Zealand switched up which Boeing 777. 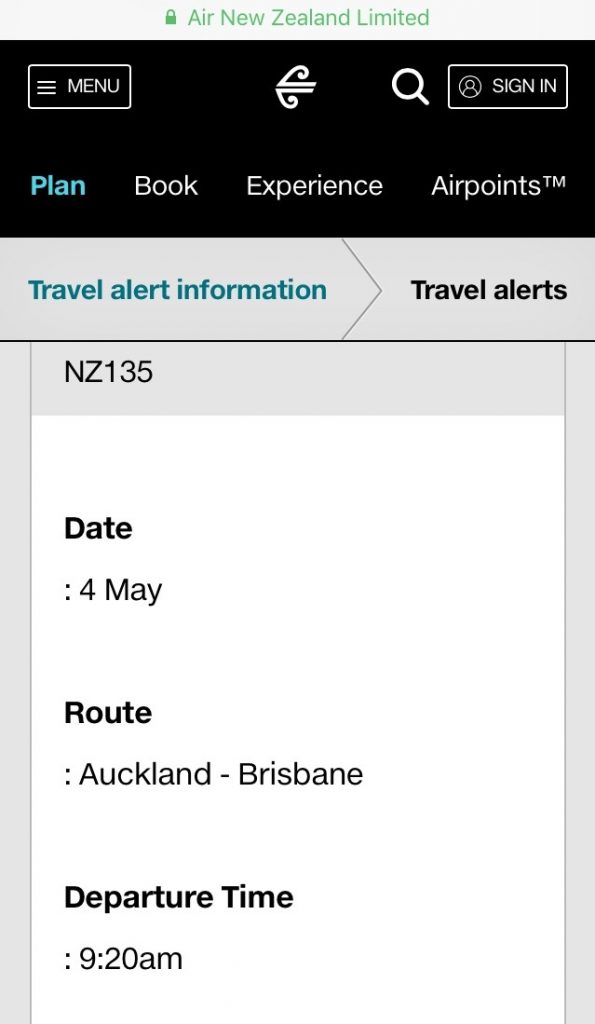 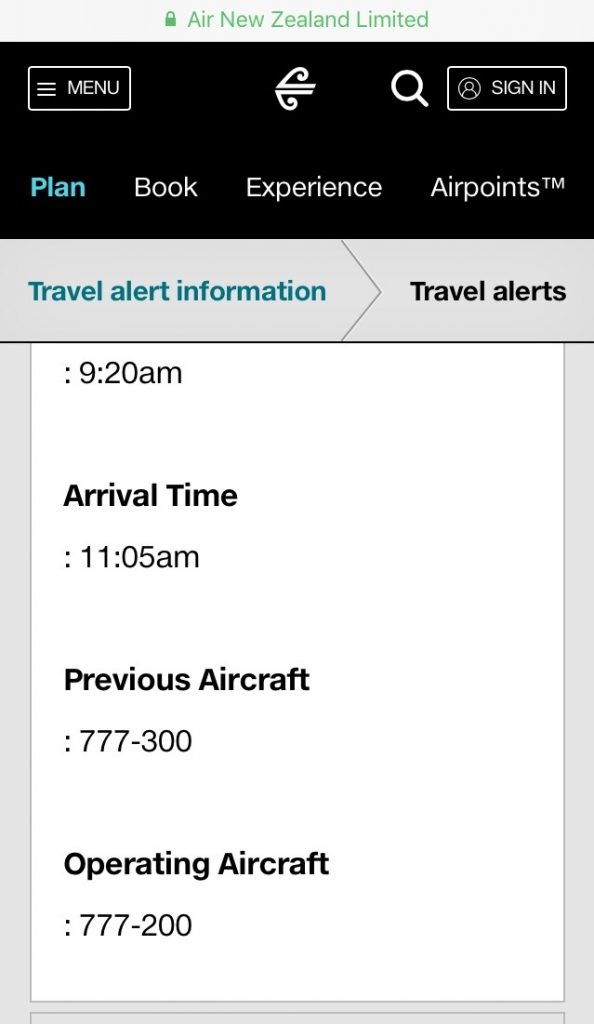 To me this was confirmation the the flight wouldn’t be a last minute cancellation. (It wasn’t)

Flight changes mid-vacation isn’t something that I desire.  I’m glad our change was only a shift of 8 hours.  Although landing in New Zealand at midnight was less than ideal, it was a lot better than not getting to the country at all.

Now back to the trip!  Read more about it by clicking here.