We arrived at the Sydney International Airport and made the quick lane change to head towards the hotel.  There is one hotel that is directly across from the international terminal, the Rydges.  After staying at a Rydges in Canberra we were looking forward to this stay.

We arrived during daylight, probably between 5-5:30pm (And yet I still forgot to take a picture of the exterior of the hotel to help out this post). Check-in was busy as it appeared there was at least one flight cancellation that had sent numerous guests to the hotel for the night.  We waited less than 5 minutes before being at the front of the line.  Check-in was seamless, and had keys in our hands in no time.

We filled up a luggage trolley with everything from the car and headed to our room.  Upon entering, immediately I was satisfied with my choice — I had reserved a deluxe airport view king room! 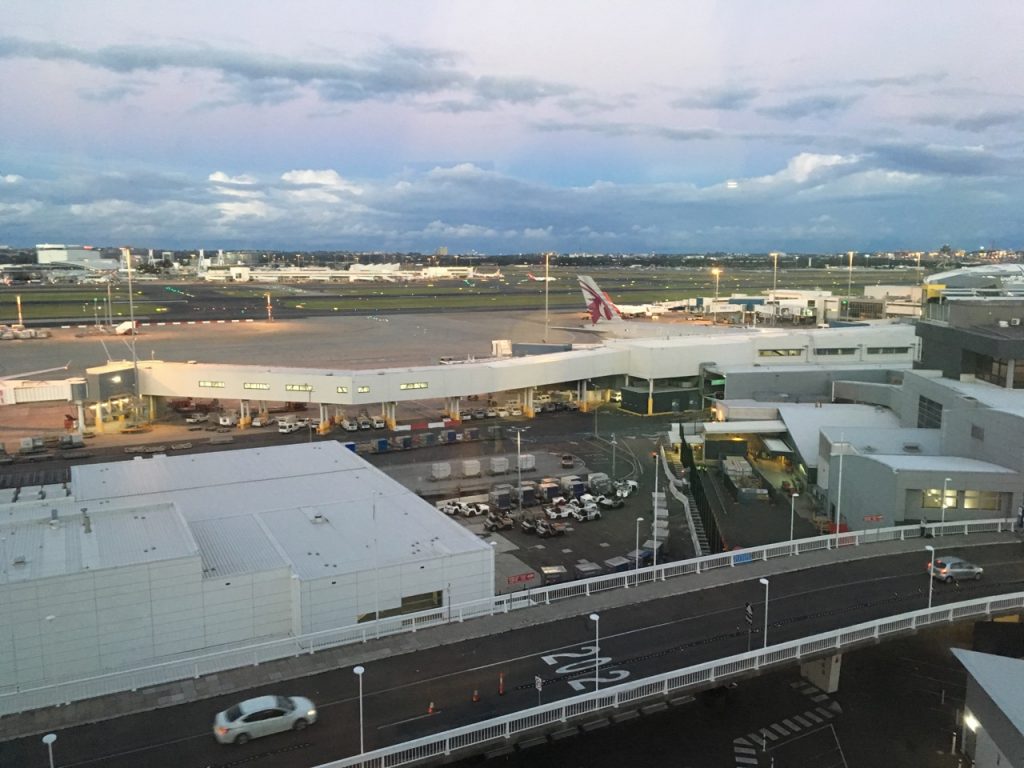 Now originally our flight the next day was supposed to depart at 11am, instead due to some changes we were on a flight departing at 6pm.  The upside of this added time gave me more time to enjoy  staring out the window.

Once everything was unpacked from the trolley I left Amber to read while I returned the luggage trolley and rental car.  The vehicle wouldn’t be needed to travel a few hundred metres to the terminal entrance. 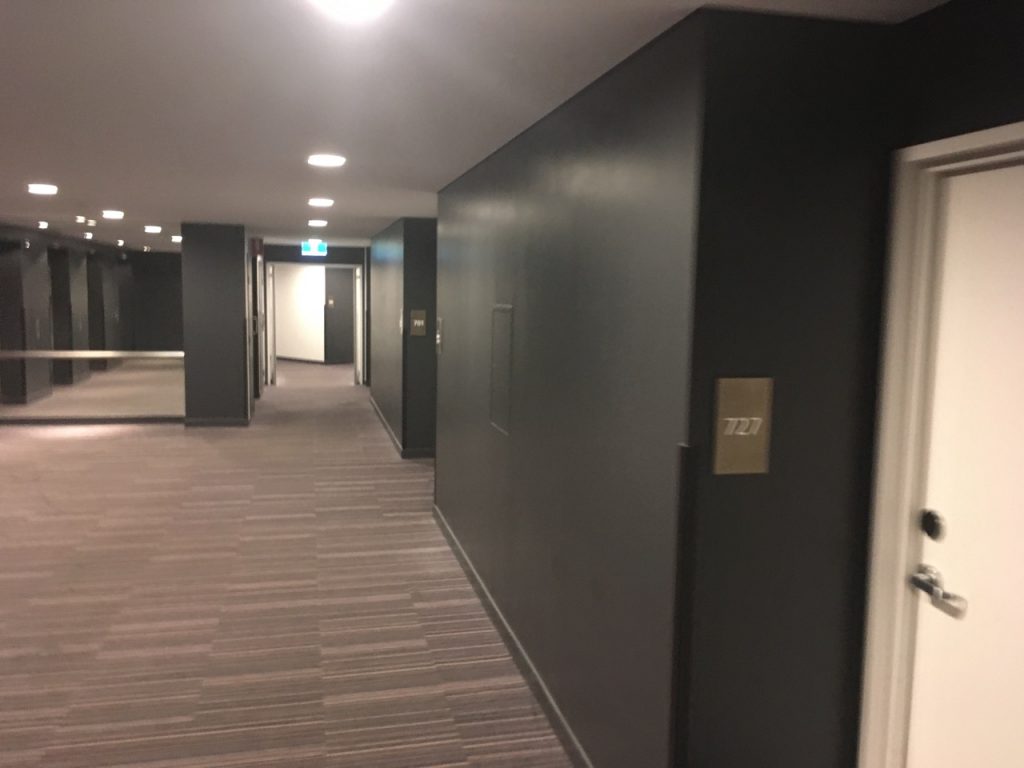 Our room was up on the 7th floor and was easy to find.  Upon entering, the bathroom was off to the left and split into three portions.  The sink and mirror was in the open.  Behind door number #1 was the toilet, and the frosted door opened into a gigantic walk-in shower.  We joked that the shower was half the size of our bathroom back home!

On the other side of the sink was the mini-bar of snacks (fridge below) and beside it was the closet: 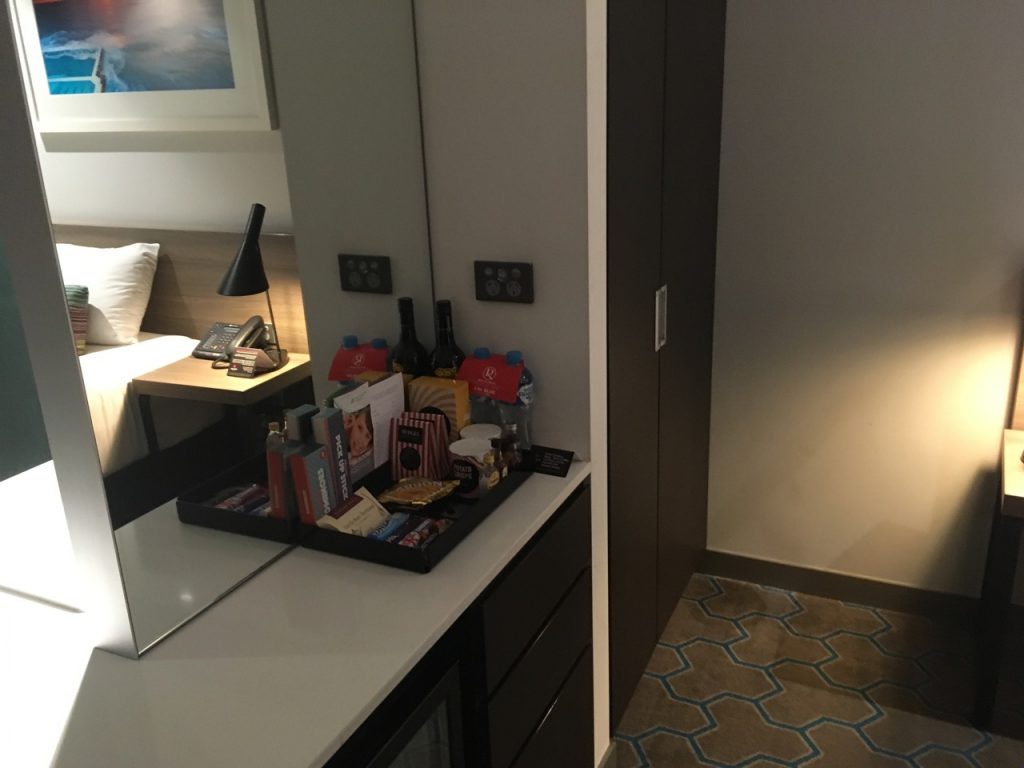 We could tell that we were back in a city as the space in the room was a lot less than other hotel rooms we had stayed in.  It didn’t matter as the desk chair was in the perfect position to stare out the window and watch the airplanes moving about the airport.  The bed, just like the one in Canberra was extremely comfortable. 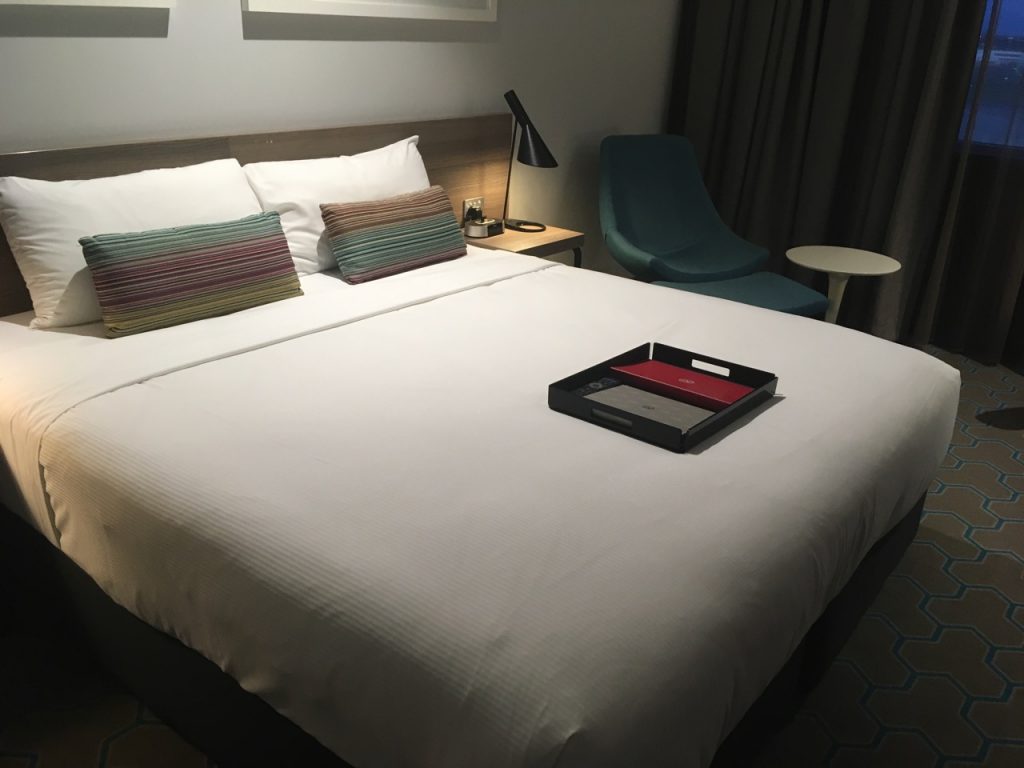 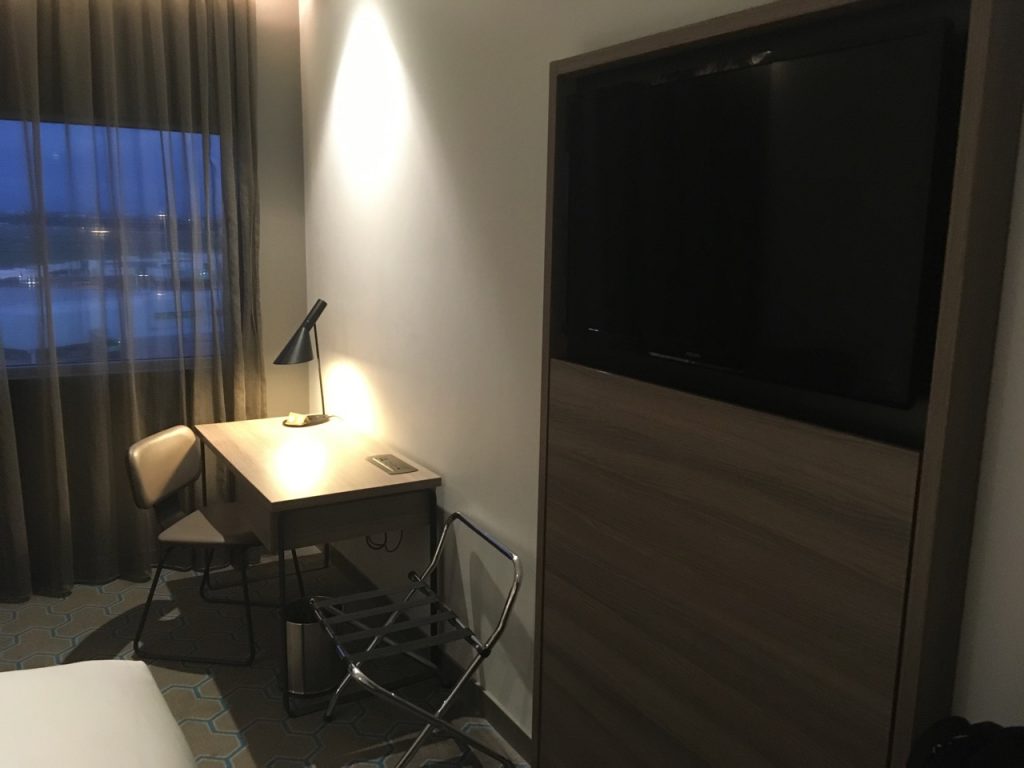 After returning the rental car we were hungry!  First, we headed to the main restaurant, Blackwattle Grill.  It’s located on the mezzanine level.  Once we were told of it being a 3 hour wait for a table we declined to wait and headed upstairs. 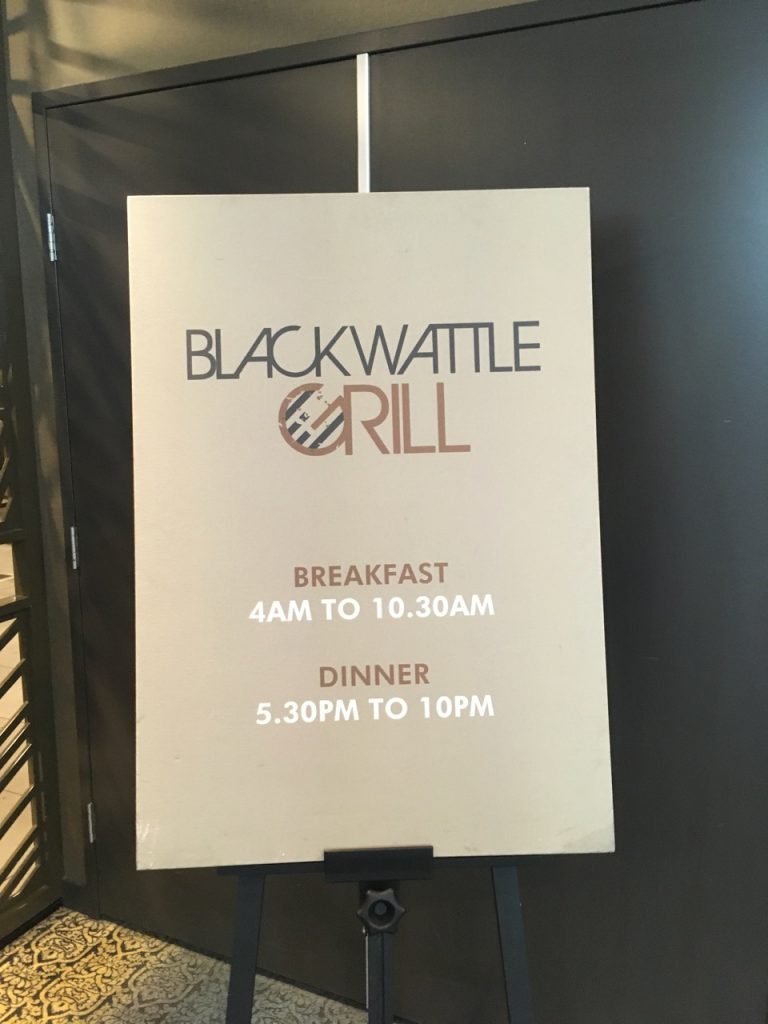 Evenings the top floor is home to their runway view bar, Cloud 9. 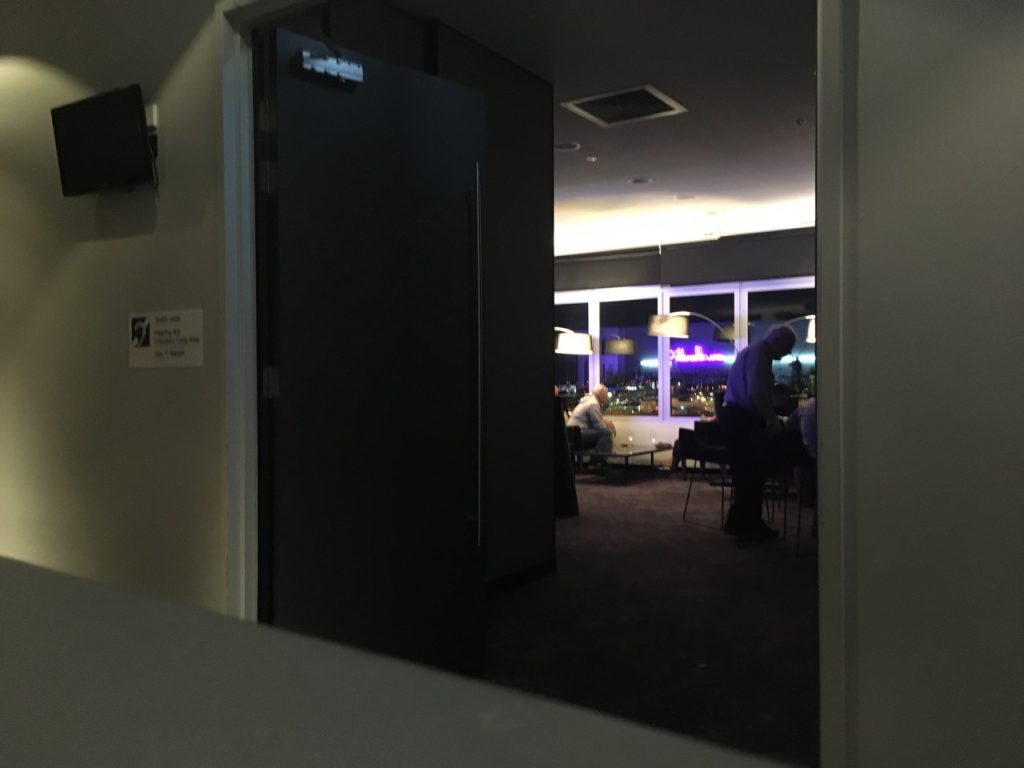 The combination of being too warm for us and the food selection leaning towards appetizers and snacks we returned to our room and ordered room service.  In less than 45 minutes her bowl of beef bolognese pasta, and my chicken Cesar salad arrived.  Both were delicious.

The following morning we returned to the grill for breakfast and we were able to score a seat quickly as we had arrived near the end of breakfast.  There was plenty of selection on offer. 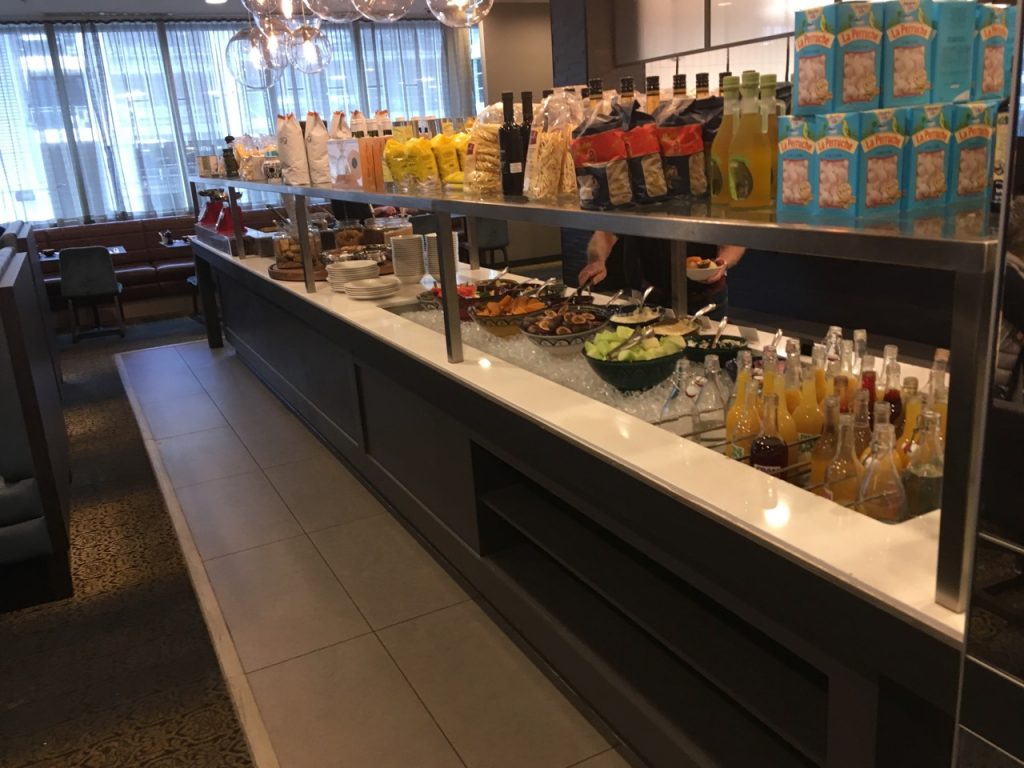 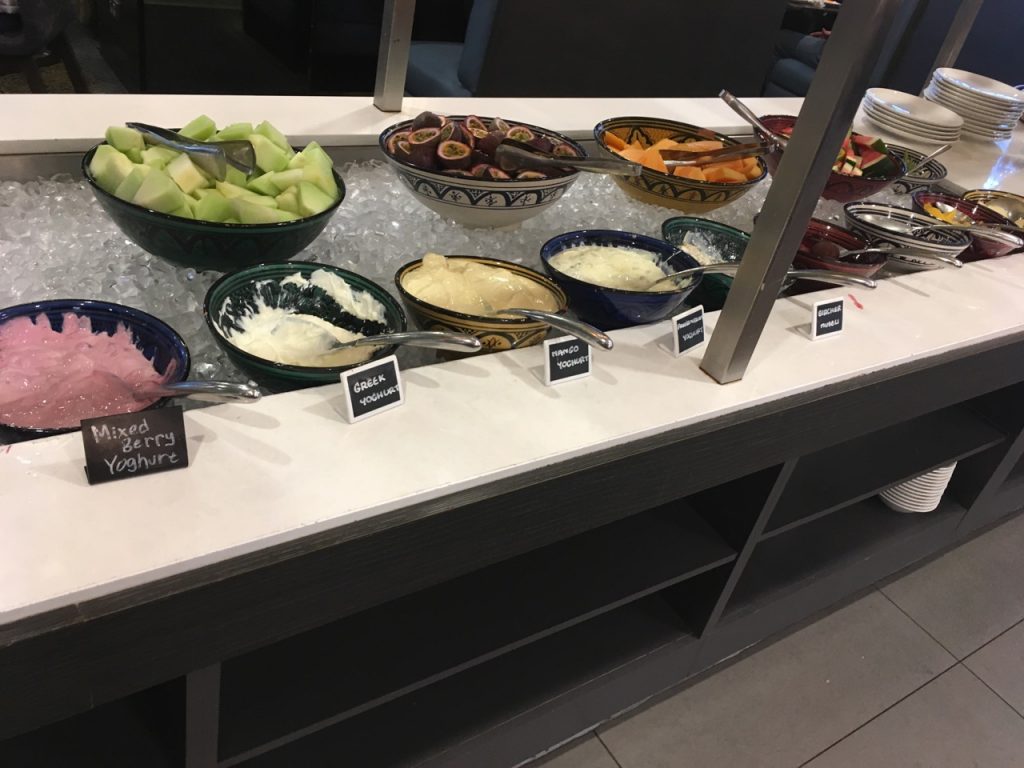 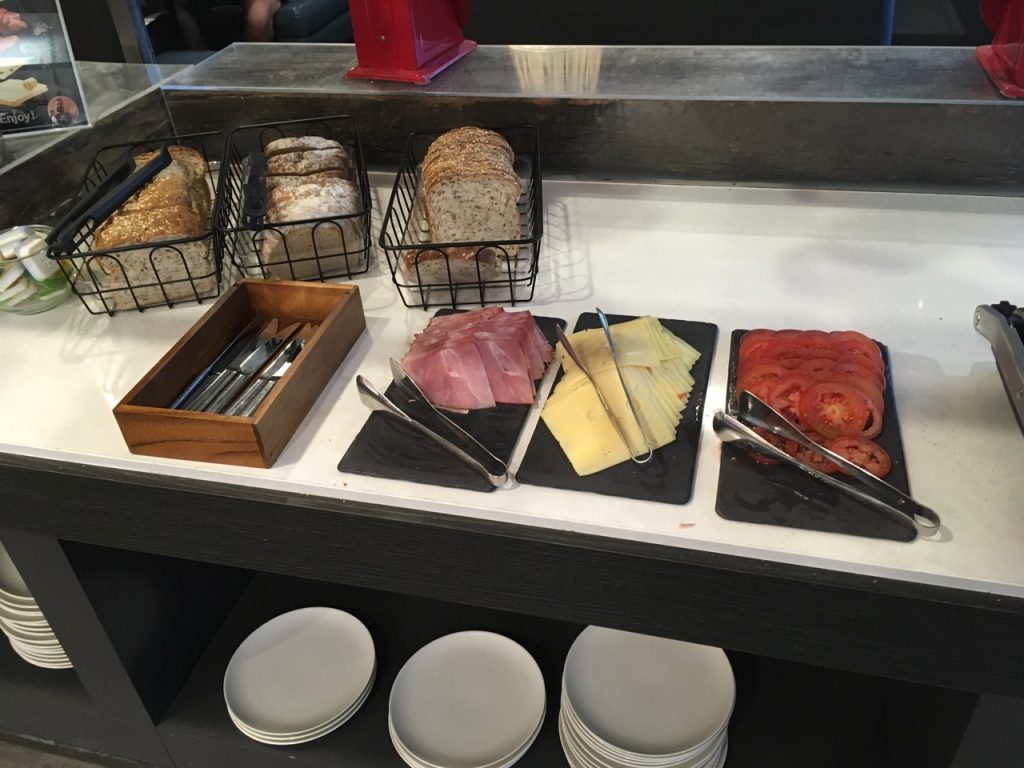 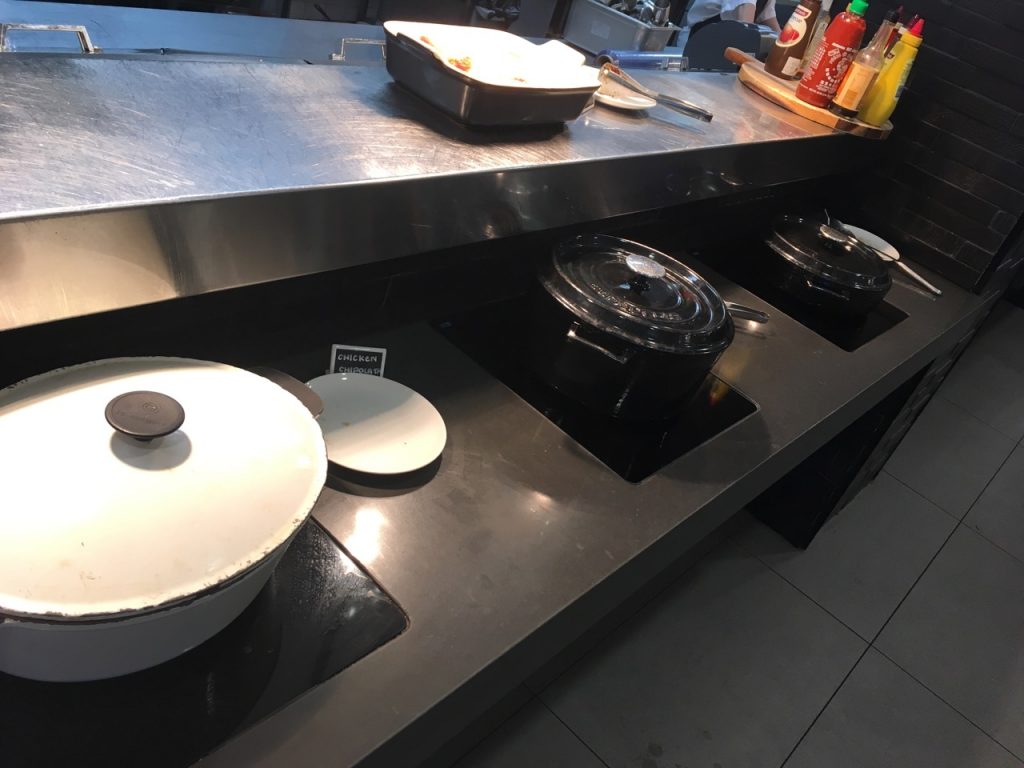 After filling ourselves with breakfast we did what any reasonable person on vacation does, have a nap.  Well she did.  Wifi in the room worked great and even as I attempted to organize pictures, it really turned into a morning taking lots of pictures of the planes at the airport.  A quick call downstairs allowed us to extend our check-out time past 11am.  Eventually we did have to leave the room and check-out.

After check-out (it was quick and easy) we stopped at their ground level dining space, Touchdown Sports Bar.  We had lunch here.  Food was typical bar food, and in the mid-afternoon this was the popular break spot for those working at the airport.

The wifi helped me turn her frown around.  The frown occurred when I mentioned to her that I had yet to book a place for our 3 nights around Brisbane, where we’d been in 4 days.  After twenty minutes or so, a place was secured, and we could return to people watching.

With it fast approaching T minus 3 hours before our flight we bid farewell to a lovely hotel, and headed to the terminal to check-in.