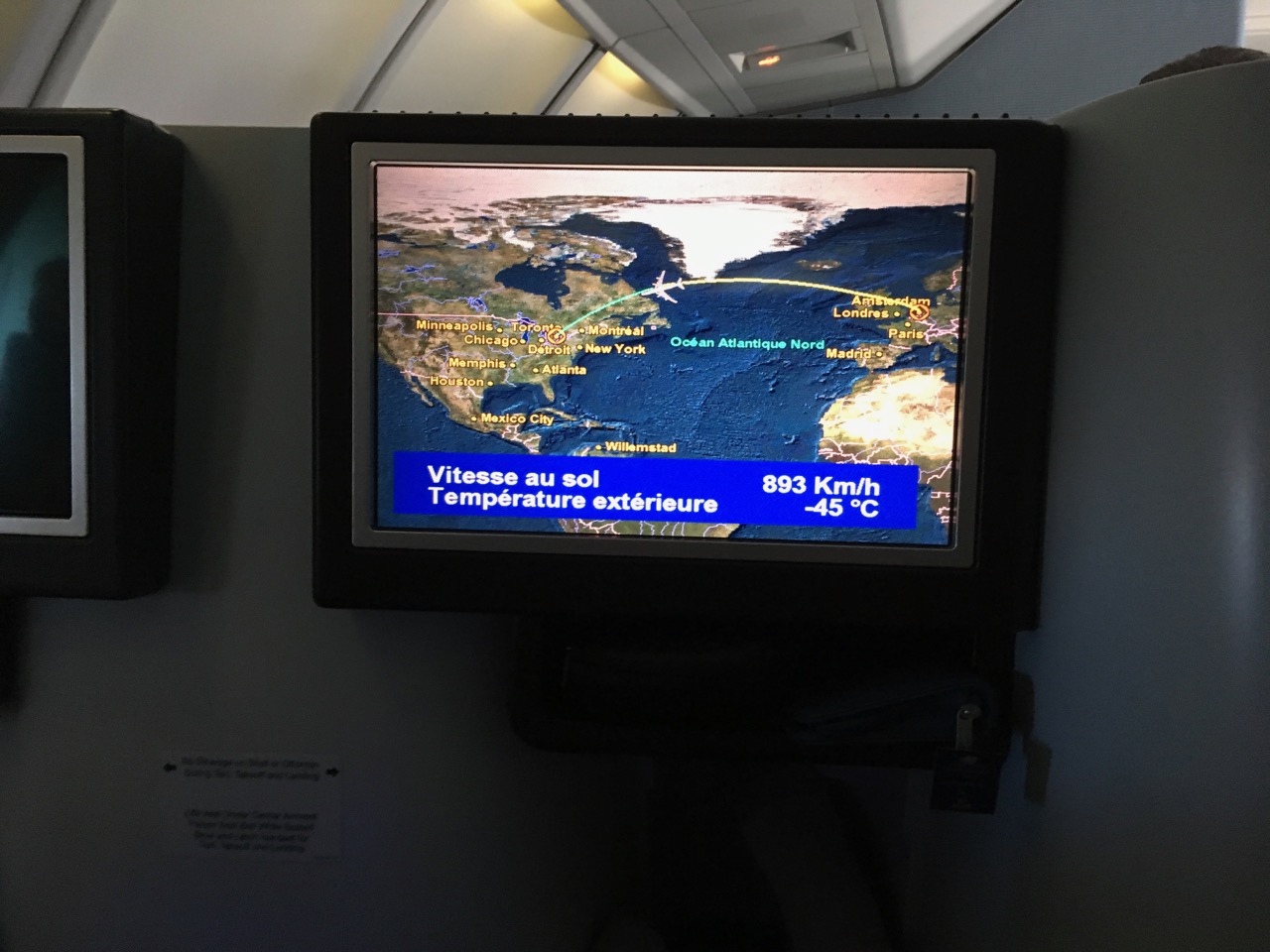 Filled with Dim Sum, we returned to the airport and quickly made our way to the lounge to relax before our final flight home.

Even though I mentioned this is the prior post, we checked our luggage before heading downtown to have lunch.  KLM has a large dedicated area for business and frequent fliers for check-in.  There is staff on hand to ensure only those eligible to use the check-in are allowed in.  During the three times we went through the area, there was no wait for check-in.

After check-in, security and passport control is one level up.  From the dedicated check-in area you head to the front of the security line via automated gates.  During peak periods this would definitely be a great benefit, however for our 2 occasions the line typically consisted of a half a dozen people.

Once through security and, with another stamp in our passport, we were off to KLM’s Crown Lounge.  On our way I stopped to snap this view from the walkway: 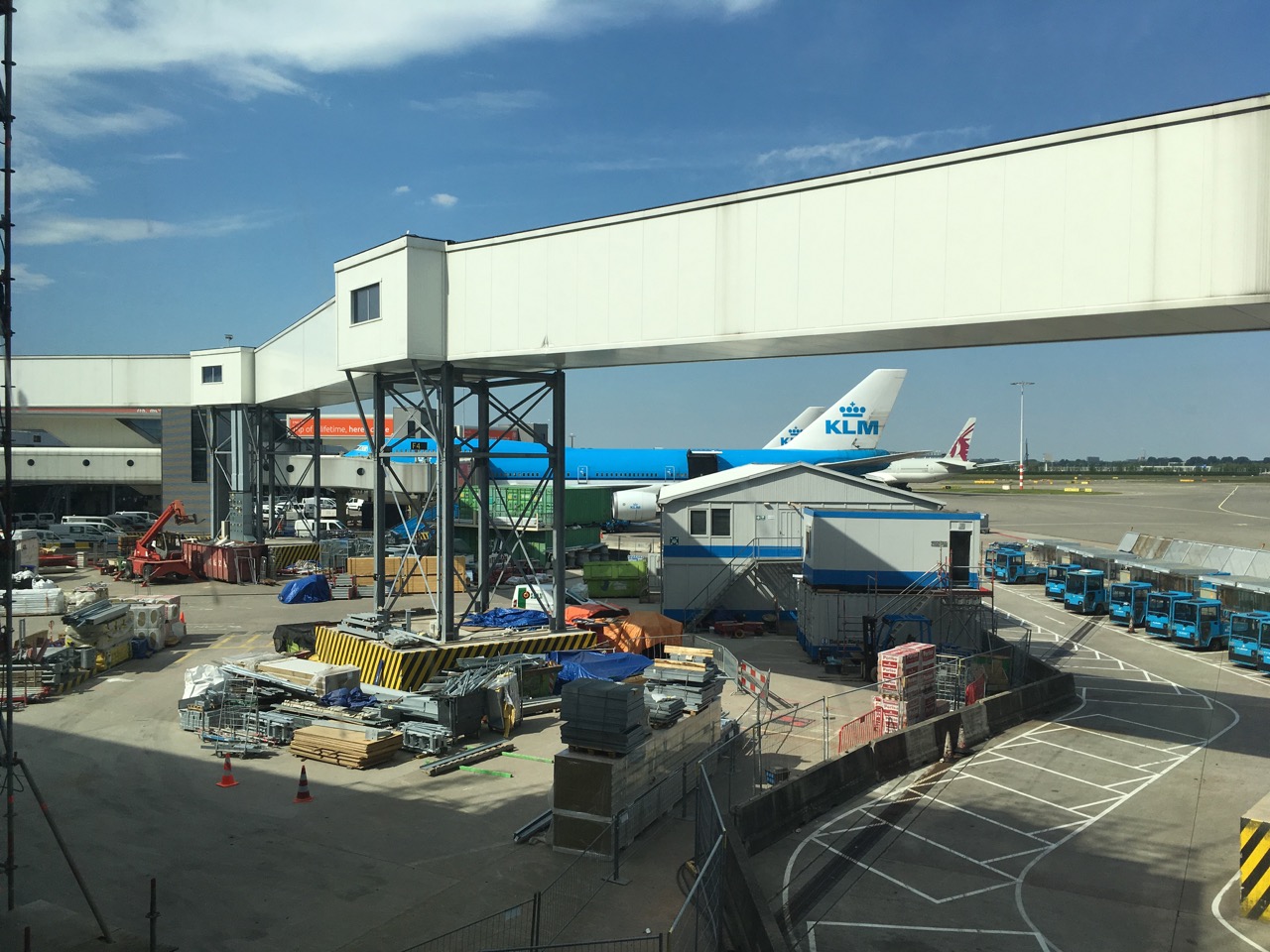 Now we didn’t spend as much time in KLM’s Crown Lounge as we did on our flights to Sydney.  You can read about that here.

And here are pictures of the food and snack options available during the afternoon:

We spent most of our time by the second beverage station that was quiet and like most of the lounge wasn’t busy. 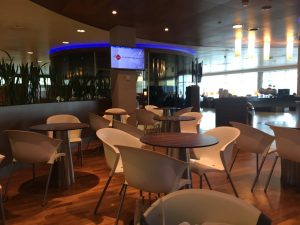 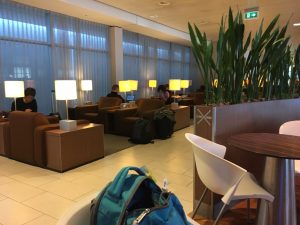 Soon enough it was our time to head to the flight, but not before playing with my snacks: 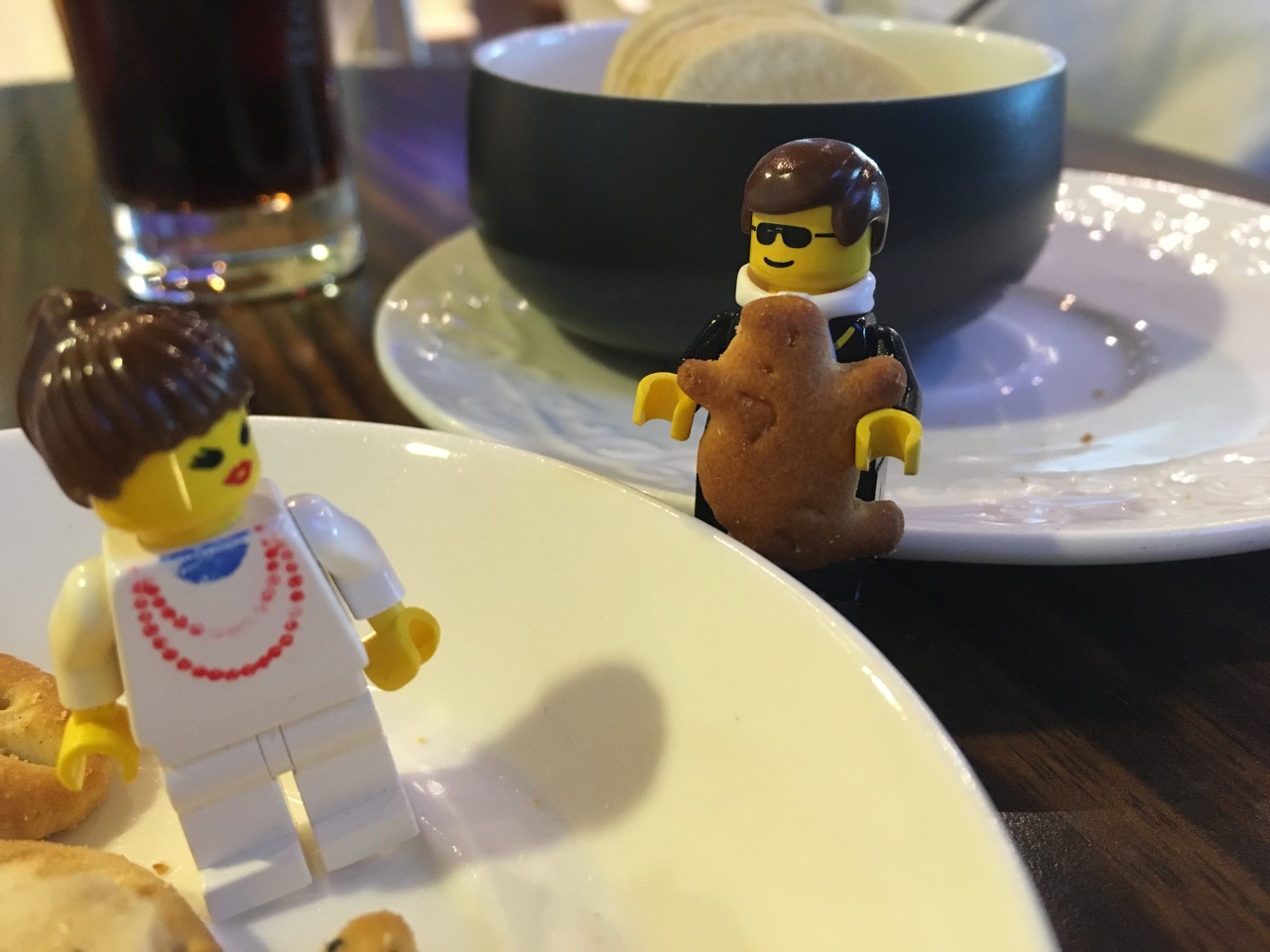 Our walk to the gate was short as it turned out that the 747 I saw on our way to the lounge was our aircraft for our flight.  Before boarding commenced I needed another picture.

We arrived at the as pre-boarding had already begun, with no shortage of frequent fliers and business class passengers in front of us in the priority line.

While waiting for passengers ahead of us to board the plane I was able to get a couple more pictures of the plane: 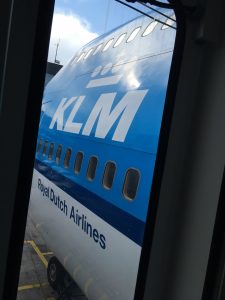 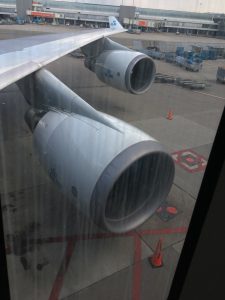 Once on board, I finally got to something I have always wanted to do — walk up the stairs to the upper deck of the 747 where I’d take my seat. 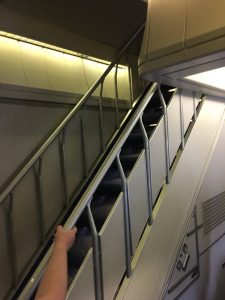 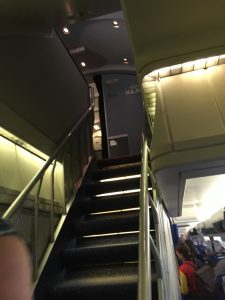 Once up and settled into our seats it was time for a pre-departure beverage.  The menu (in the gallery below) was handed out shortly after take-off.

At 5:45pm, the flight crew made their introductions informing us the flight is scheduled for 7 hours 15 minutes.  Pushback began almost immediately after the conclusion of the announcement.

With drinks and nuts delivered 20 minutes after take-off we placed our order for dinner. 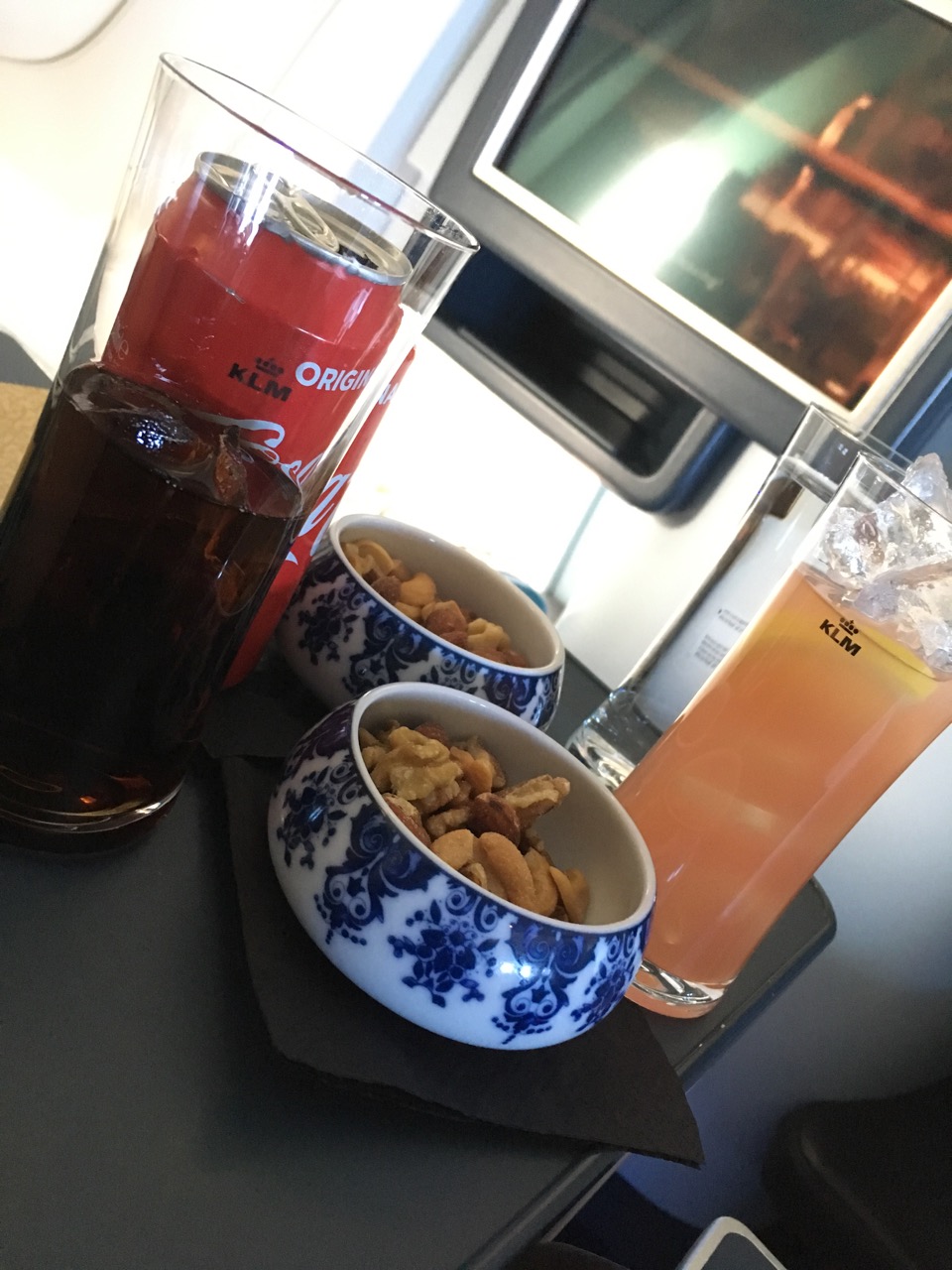 From the menu, the seasonal speciality stood out for us.  We have been in Europe during the spring when asparagus is in season, and it’s a big deal.  Every restaurant we’d visit had it on their menu.  An hour after take-off our table tray was set and the appetizer was ready for us. 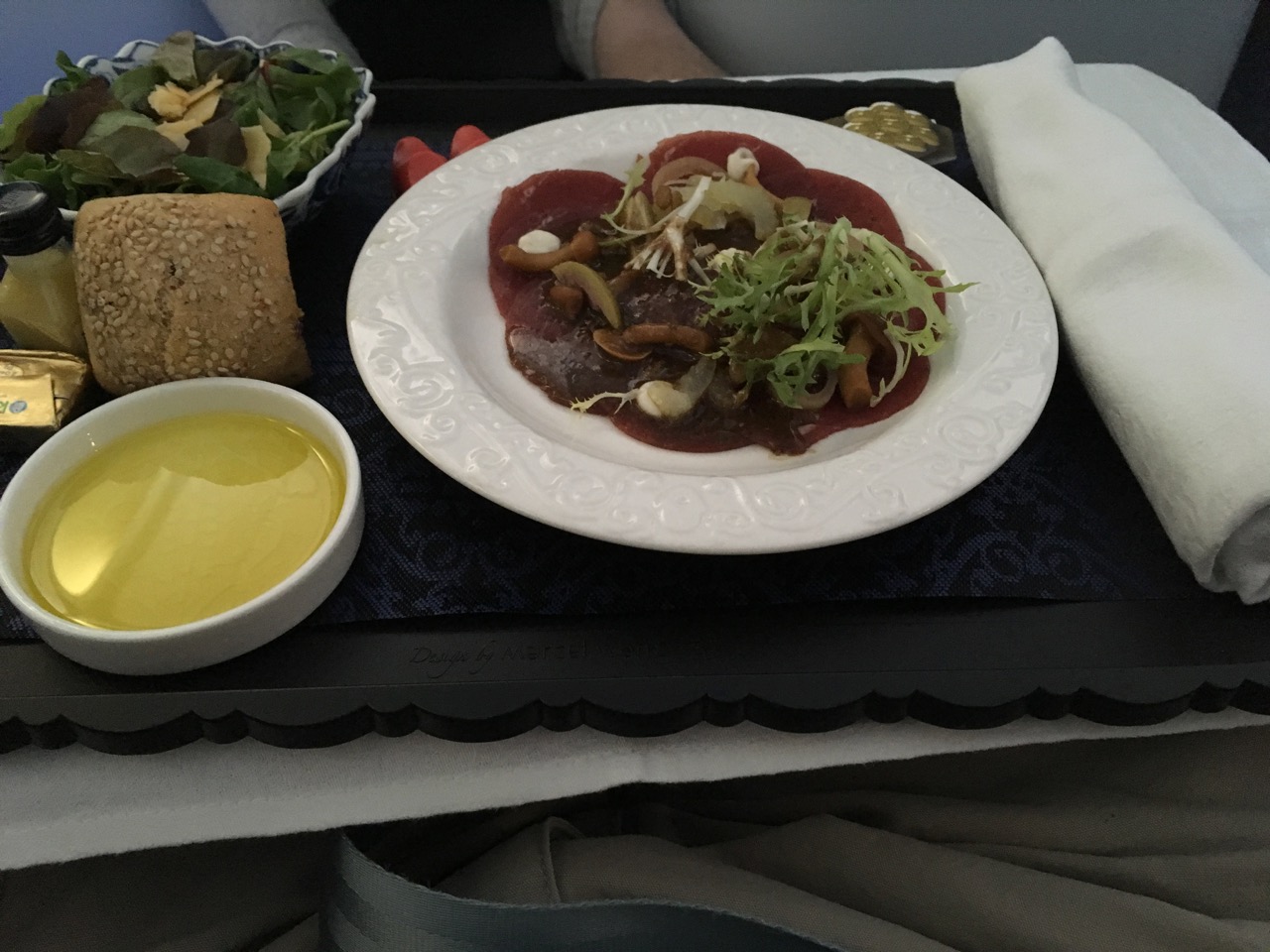 And then followed by the main course: 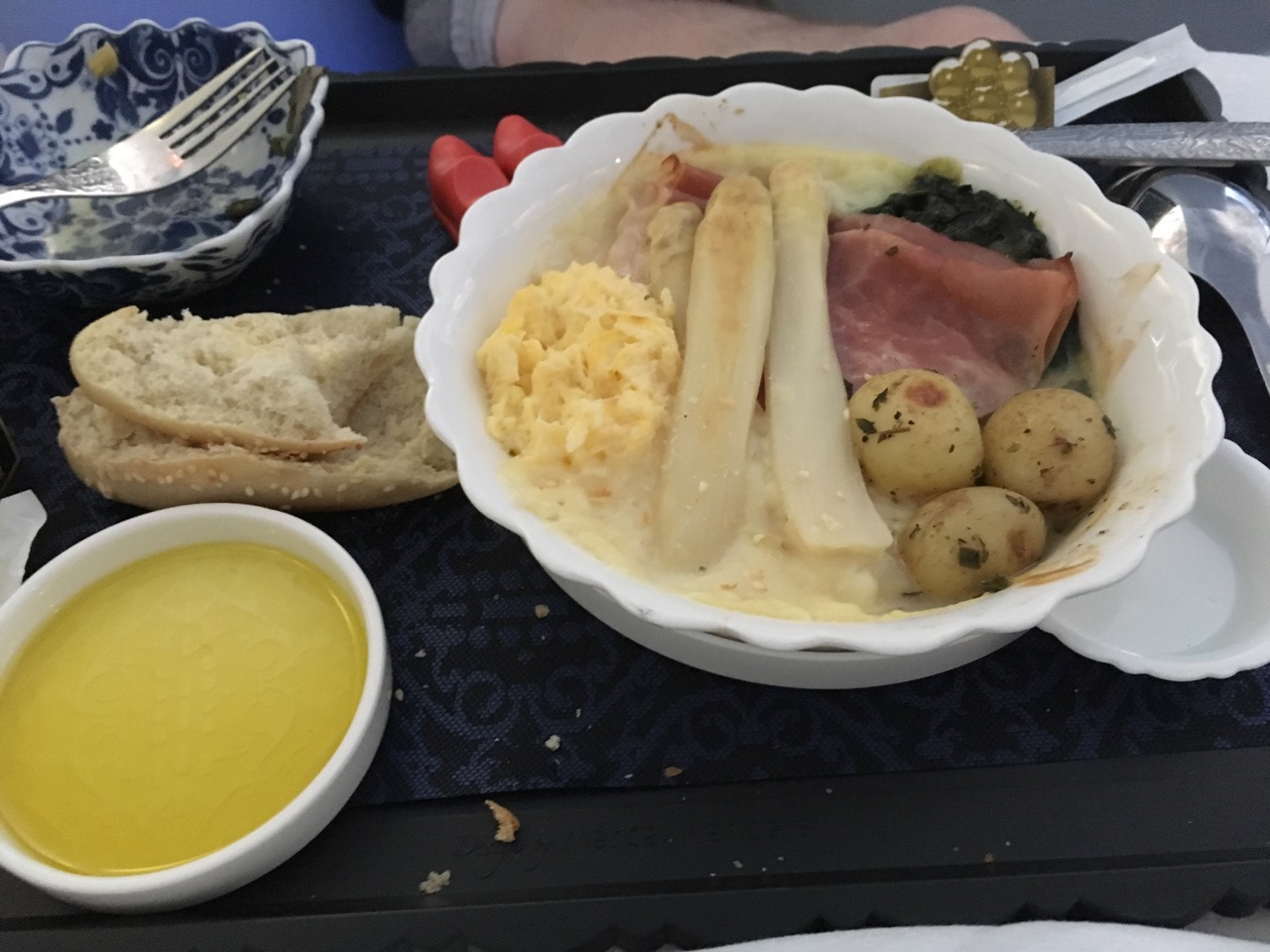 The meal was fine, and we were both happy with our choice for the main course.

Meal service concluded two and a half hours after take-off giving us time to finish any remaining movies that we had started watching during our flight to Amsterdam the previous day.

Somewhere over the Atlantic the crew offered an ice cream snack that I didn’t decline. 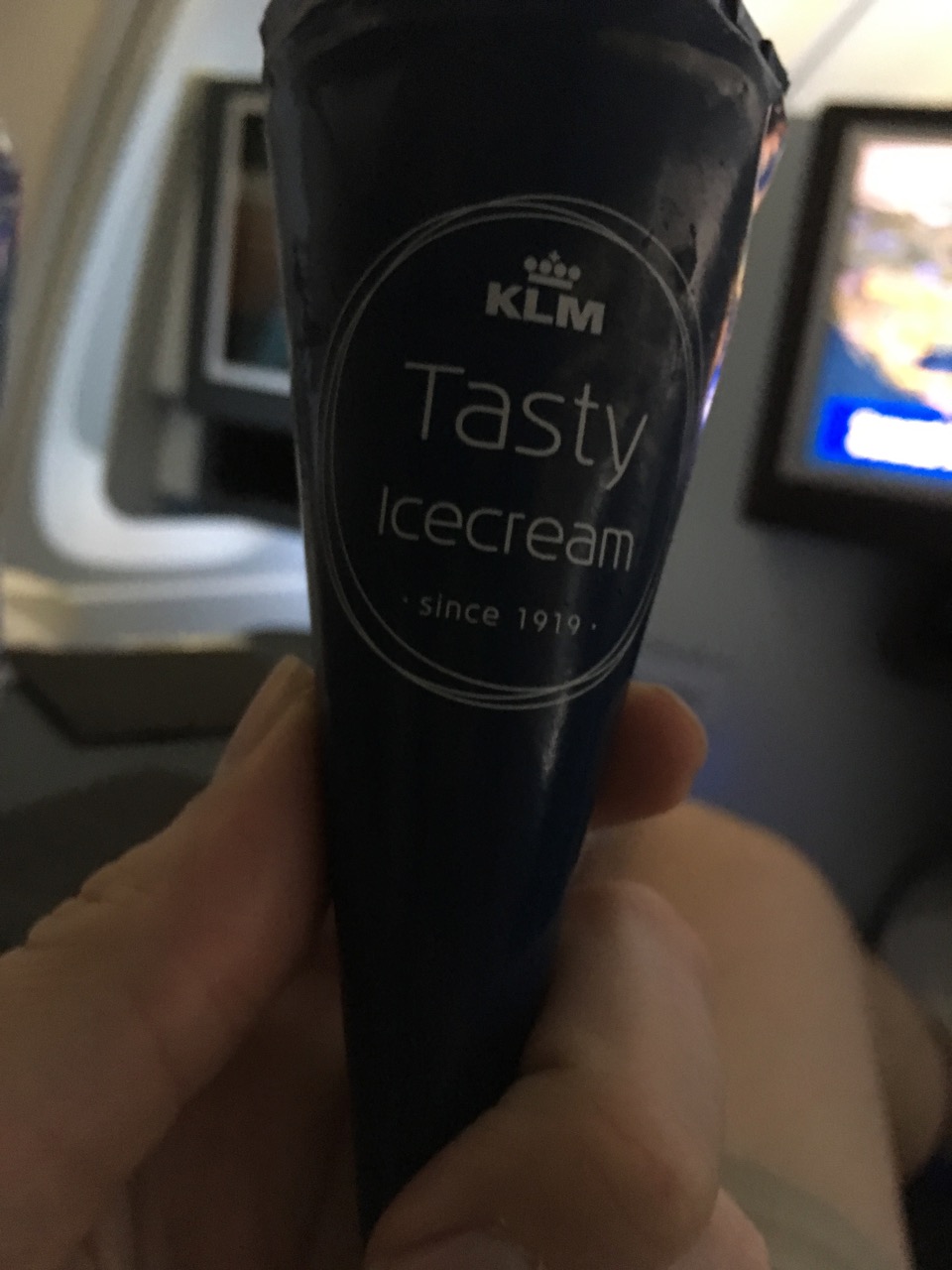 90 Minutes before arrival the main lights were turned on, and towels were distributed ahead of a light meal before landing in Toronto. 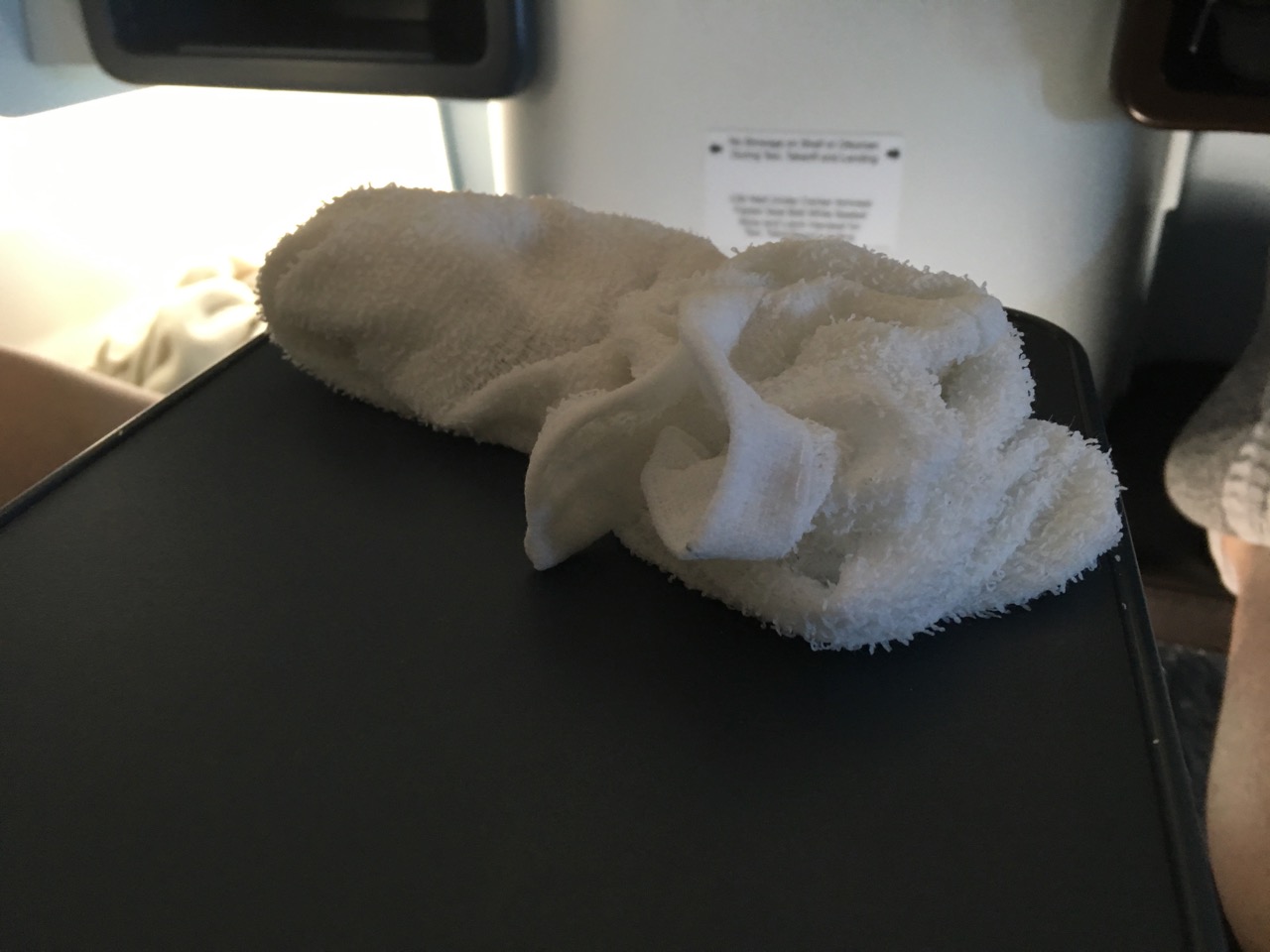 The snack was a hamburger, and I finished mine before getting a picture.  It was fine, however it’s wasn’t memorable.  At this point the crew distributed the iconic Delft houses, where we got to add 2 more to our collection.  From this trip alone we received 8!
The flight deck updated us on our progress and ten minutes after their message, our descent towards Toronto began.  The descent, approach and landing was smooth.  The sign for the seatbelt was turned on at 7:15, and we landed without delay at 7:25pm local time.  We were off the plane quickly, and home within an hour.

With using all of our vacation for the rest of year, it would be a quiet year for any other trips.