The heat from Saturday continued into Sunday. We arrived at the track late in the morning, a little before 11am.  Before I caught the Porsche #2 celebrating after taking the checkered flag a lot occurred.

The designated parking area I opted for was a short walk from the track and our grandstand seats. 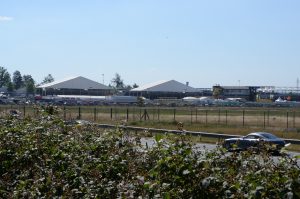 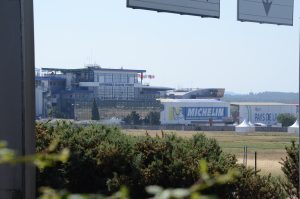 After purchasing a few souvenirs from one of the many ACO Le Mans booths we headed to our grandstand. 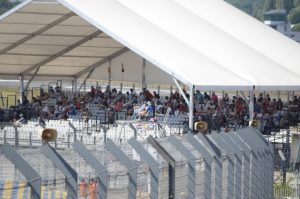 There was ample space as other spectators had yet to return to their seats. Once Amber was comfortable with her smartphone and tablet to read, I headed off to explore the track.

The quantity of screens around the grandstands made it easy to find one when the race announcer became very excited because the overall leader Porsche #1 suddenly come to a stop with just over 4 hours remaining.  The race was not kind to LMP1 class.  As Porsche #1 came to a halt, the race had Porsche #2 many laps behind from early race mechanical work, and several laps behind that was the only other LMP1 running entry, a Toyota.  With Porsche #1 in retirement the overall lead was passed to an LMP2 car, one of Jackie Chan’s Sparkle Roll Racing team.

I headed up towards the Dunlop bridge. The distance was deceiving to walk as I was accustomed to watching the cars blast up the hill, through the chicane and disappear under the bridge in an instant. 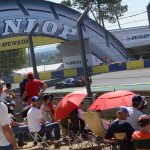 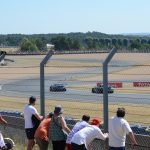 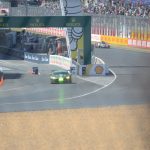 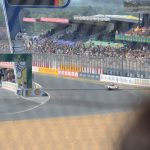 Heading up to Dunlop

Upon arrival to the area, crews were taking the main concert stage down that had hosted concerts the night before. There were still many vendors and food options at this spot on the track. 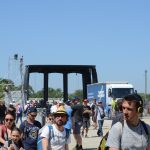 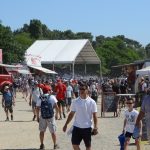 From the other side of the bridge, you could see a significant portion of the track through the Esses and onto Tetre Rouge. It wasn’t even noon and the temperature was already flirting with 30C. 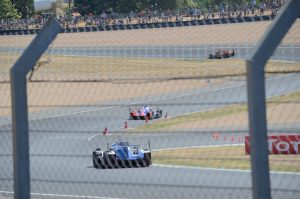 Before returning to the grandstand, I took a few more pictures from the Dunlop Chicane: 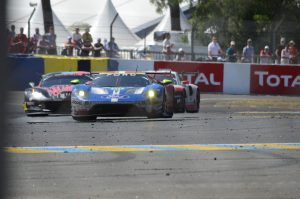 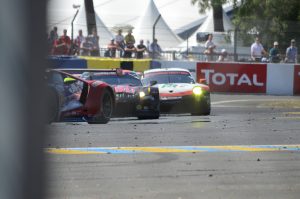 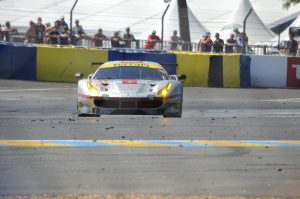 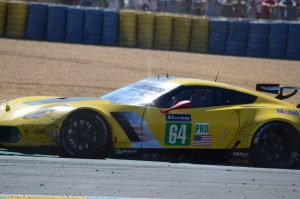 I returned to the seats to get Amber’s lunch order. Food was adequate, however paled in comparison to the home cooking we received in the Corral.  Behind our grandstand, and across the street was the local airport where Helicopter rides were available to take in the race. 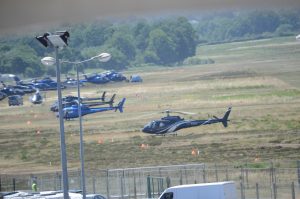 For the remaining hours we enjoyed the shade of the covered grandstand, the light breeze, and most of all being at the top a full height railing to lean back against.

Crowd participation was impressive. The crowd thunderously roared when the #2 Porsche passed the leading LMP2 vehicle to be on the same race lap. The Porsche continued with its race pace, and when it passed the Jackie Chan team LMP2 car to become the overall leader, the crowd roared to life again.

With an hour remaining, the race in LMGTE Pro class was as close as ever. 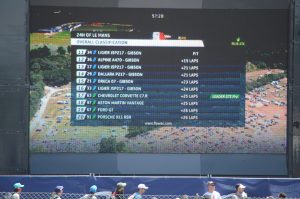 For the final 30 minutes of the race Corvette had a slim lead over Aston Martin, who appeared to applying for a tail pipe probe job with Corvette Racing. 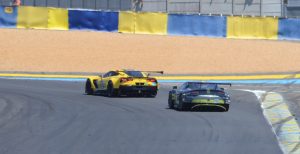 On the penultimate lap, Tommy Milner cut a corner in the Corvette that was foretelling of Aston Martin’s pass as they entered the final lap.  One sign of the race coming to its conclusion was the rush of pit crew to the wall to cheer their respective teams: 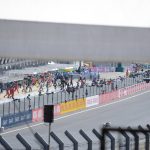 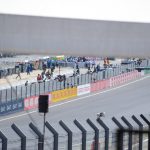 The last few minutes without radio made it difficult to follow the GTE Pro race as the TV screens were focused on the overall leader, the LMP1 car. During GTE Pro’s final lap we didn’t see that a Ford GT also passed the ailing Corvette, as it had suffered two flat tires on the final lap. 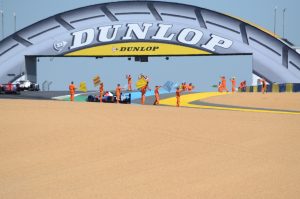 The finish for each classes was met with great applause, appreciation, and admiration. With the thousands around the start finish line, each class winner was cheered, with Jackie Chan’s team meeting up at the finish line to take in their 1st and 2nd result in LMP2 side by side. 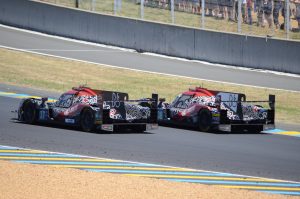 For LMGTE Pro it was Aston Martin, Ford and Corvette. The heat was evident as the #64 Corvette popped its door open after passing the checkered flag. 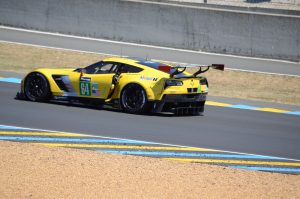 The most appreciation, in my biased opinion of crowd cheering went to #63 Corvette as it crossed with two flat tires, and a damaged front end from the front flat tire. 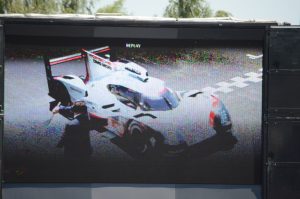 Now had we left directly from the race, traffic would not have been an issue. Instead I wanted to say goodbye to the remaining folks at the Corral. Although the drive to the Corral was quick and easy, our exit took almost an hour to cover 1 km as there was one road leading out from the race.

Upon our return to our hotel we got changed to have a proper dinner. This though was its own challenge. Sunday in a small town is a day for rest for many people, including the operators of the first four restaurants we stopped at in the center of Laval. We were successful in finding one open, and enjoyed dinner. The meal was also a belated celebration dinner, our wedding anniversary was the day before.  It made me recall how I proposed the trip to Amber.  It went something roughly like:

Me: “How would you like to celebrate our wedding anniversary in France.”
Amber: “Sure. What’s the catch?”
Me: “We get to celebrate it with hundreds of thousands of race fans.”
Amber: “Um, okay. How long is the race?”
Me: “24 hours.”
Amber: “Um, well then we aren’t going to stay and watch all of it, and the hotel has to have air conditioning.”
Deal! 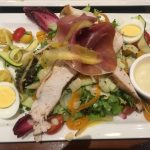 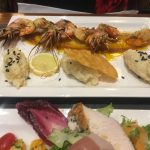 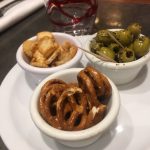 Snacks before the mains 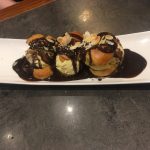 Permalinks to other parts of our trip:
Overview